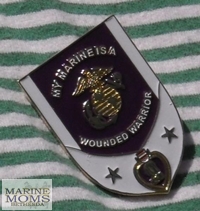 The picture is a pin that one of the Marine moms at the luncheon was wearing.  The Maryland Marine Corps League gave it to her when her son was on the hospital ward a few weeks ago.

Barb and I met Jean in Annapolis and we carravanned over to the hospital. Traffic was heavier than usual on the beltway and Susie was already there with loads of food. Jess joined us soon after. As soon as she walked in the door the line for the seated massages began to form. 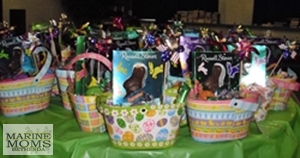 Susie had the idea to do up Easter Baskets since it was so close to Easter. We had “Peeps” in every color – yellow and pink… green… blue… turns out one of the gals there loves “Peeps” so they made her day.  Bethesda is a military hospital… not all of the barrack residents are combat wounded. She is not, and has her own courageous story.

Lasagna was on the menu because one of the Marines had requested it when we were there in February. Barb fixed him a large takeout box to take back to his room for later. 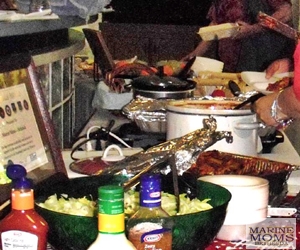 We put together a “movie night” box for the guys with a new movie, popcorn, Tostitos and salsa, and some other snacks. We also had some things for the “stash table”, gave out some quilts and handed out the encouragement notes. As always, the pillowcases were a hit. 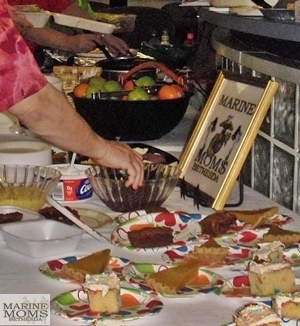 To our note writers, yes, the notes are appreciated! Thank you for taking the time to write them! I overheard a very heartwarming comment about them.

To those of you, who help make the luncheon happen through your gifts of donations, thank you so much!

Thank you, Grace and Aunt Jeanne, for your “beforehand help”.
Thank you Susie, Barb, Jean, and Jess for your help the day of the luncheon!
Job Well Done!

I have had the opportunity to see a few “formations” in the past — Parris Island on Boot Camp graduation day; MOS graduation day at Aberdeen later that summer; Homecoming at Camp Pendleton after a tour in the “sandbox”.
“Formations” are when a squad, platoon, company, or battalion line up and report to the person in charge.

We had the opportunity to watch a formation while we were there for the luncheon.

Each pair of boots and sneakers (not everyone is able to wear boots right away because of injuries) you see above has a story to tell… a story of courage and bravery and a story of hope for the future.
They have sacrificed much for our freedoms.

Those who expect to reap the blessings of freedom, must, like men, undergo the fatigue of supporting it.
~Thomas Paine

When a serviceman or woman is wounded, it affects the whole family. One piece of advice a mother of an injured Marine has passed on to me is:
“Write everything down.”

The Warrior Care site has a booklet you can print out –
“Keeping It All Together –
for wounded, injured, and ill service members and their family.”

It helps you keep track of everything before, during, and after a hospital stay, and through the entire recovery process. It has information for the patient as well as for the family and caregiver, with support links for all service branches.
(link broken)

If you have someone in the military, think about printing it out, store it in a safe place with the Power of Attorney and other information you keep on hand during a deployment, because if (and I hope it never does!) that phone call comes a “fog” may set in. This will help keep you organized.

If you would like to send an upbeat, positive note of support and encouragement to the wounded, injured, and ill combat patients at Bethesda, you can email them to (4/2/2021 – email address no longer active).
We will print them out and hand-deliver them for you.

Our quilt raffle begins May 1st  with the drawing on August 19th at our Mercy Hall barbecue. You can see a sneak peek of the “Maid of Honor” quilt here. 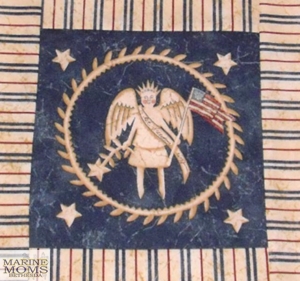