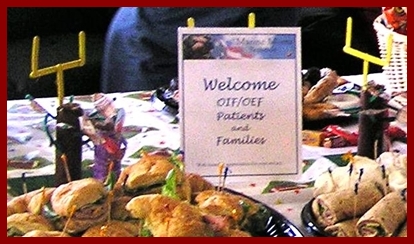 The online community of Marine Moms spreads far and wide across the country and every once in awhile things work out and we are able to meet our online sisters, our sons’ “other mothers”, in person and that’s what happened at this luncheon. 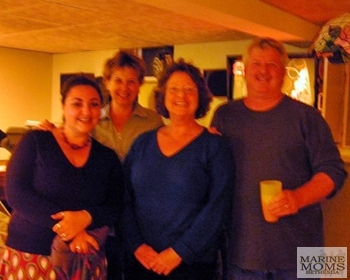 Ellen-Alisa was out here visiting Ali, and they were able to join us.

When Janet offered her help with encouragement notes I quickly took her up on her offer and asked her to join us so she could see first hand what Marine Moms-Bethesda is all about. It was nice to finally put real people to the emails, and I was so happy that Janelle, Deb, Scott, Gladys, and Bob were able to meet my online friends.

Ellen-Alisa, Ali, and I met at Janelle’s and all of us went shopping together, first stopping by the Dollar Store for gift bags. They had their Halloween stuff out so I loaded up on smoothie cups for the luncheon at Mercy Hall later this month.

Then we headed over to Sam’s Club. After we finished in Sam’s, Janelle headed back home, we picked up the rest of what we needed next door at Wal-Mart and drove on over to Deb’s.

We made up the sandwiches and mixed up the Buffalo Chicken Dip, then went out to dinner at one of Deb and Scott’s favorite seafood restaurants.

Ellen-Alisa had never had a crab cake, a must have when you are in the area! After dinner we put the gift bags together and sat around and got to know each other a little better.

The next morning we arrived at the hospital behind Gladys and Bob, and Janet and Lew.

Janet printed the support and encouragement notes out for us at home and then stuffed the envelopes I brought while we were setting up.

This is what she had to say about the luncheon:

Lew and I had the privilege and honor to help serve a luncheon at the National Naval Medical Center in Bethesda, Md.  We were both awed and amazed at the amount of food that was both homemade and purchased for ‘our’ wounded heroes and their families.  Jane and all the other helpers certainly know how to put out a spread!

The delicious aroma of chili and chicken-cheese dip was wafting down the hallway.  It not only enticed those for whom the meal was intended, but others who just wanted to see what was going on.  One of the Navy Chaplain’s stopped in and was shocked and so grateful for what MM-B was doing to make at least a few hours feel like home.

Mostly family entered the room to partake in the meal.  They’d fill a plate so they could take it back to the room of their loved one.  One couple whose son was a patient hadn’t been eating at all.  They took a smoothie back to the room and later returned to say that it was the first ‘real-food’ their son had eaten.

Another dad and his little girl enjoyed a hot meal before flying back home – he was leaving his wife with their son.

The room was decorated in a football theme; football balloons hung from the ceiling, a banner across the back wall, and about 20 handmade football trees made by a local kindergarten class donned the center of the tables. This was topped off with the game being played in the background. 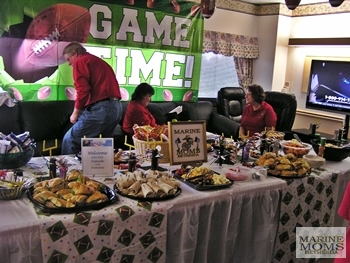 MM-B has some diligent ‘Elfs’. There were goodies bags chocked full of items to eat and lotions for the moms, handmade quilts and pillowcases, Dunkin-Donut gift cards, beautifully made ribbons in recognition of those who served in Iraq or Afghanistan.   So many reaching out so that our Wounded Heroes and their Families know they are thought about – a very tangible expression of love.

The conversations we had and the patients we met will be forever etched in our minds.  Jane, hats off to you and your faithful crew!!  Thank you!

Praise God for our Brave Heroes.

Thank you for helping us, Janet and Lew.

Ellen-Alisa, Janet and I went down to the Liaison’s office and then over to Mercy Hall to drop off some of the Entenmanns’s Dave sent with us.

In the Liaison’s office we met Corporal G. from 2/8, wounded earlier this year, and chatted with him and the other Marines who were there holding down the fort on a Sunday afternoon.

Cpl. G. asked us to make sure to visit the new TBI ward so we did that, too. Most of the guys there were out on passes and we left the bags with the snacks and notes and some take out boxes full of food for them for when they returned. We spent some time speaking with the nurse and one of the patients who was headed home later that day.

To the Crew who gave up time from their very busy schedules to help shop, do the prep work and serve the luncheon, to our thoughtful and generous “Elfs” from all over, to the note writers – Thank You!

Oh! We saw the framed note from the wounded SEAL that Brenda told us about earlier this year. It is right next to the nurses’ station. 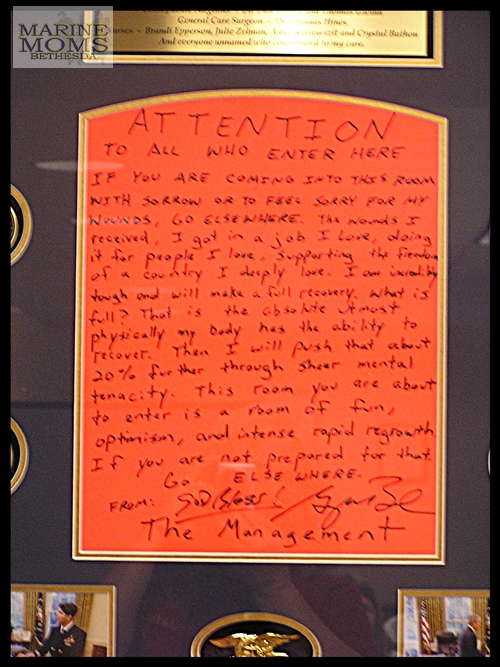 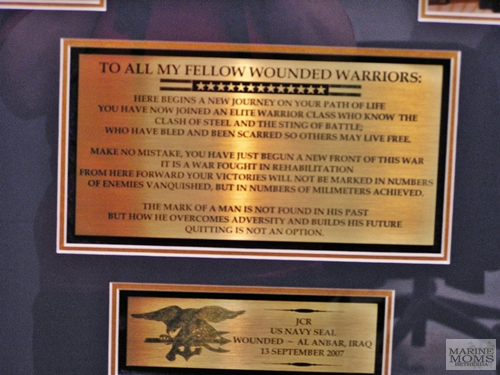