*NOTE TO SELF for future luncheons*

*You do not need a whole bag of Matchlite for S’mores.* 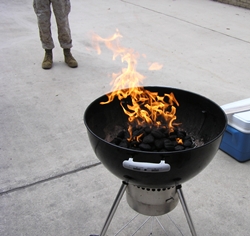 Eh… yeah… what can I say… when Deb’s not there, I kinda go overboard sometimes… most times…

Not always a good thing…

Temps were in the 90’s too. We had the candy bars, marshmallows and graham crackers in the little cooler to keep them from melting. Umm hmmm… the graham crackers would have melted – or at least turned soggy from the humidity.
.Jean and I shopped at Walmart and BJ’s the day before and did the food prep at her house. BJ’s had a different selection of things than Costco and Sam’s has and I think BJ’s was a wee bit higher than the other two places for what we normally buy. It still beats shopping at the local grocery store, though!

Deb dropped off the Entenmann’s that evening and let us borrow her camera to video the quilt raffle drawing. Julie met us Thursday morning at Jean’s and followed us over and Jess met us at the hospital.

We did pork barbecue, chicken salad sandwiches, and a test trial of pigs-in-blanket. Jess made a delicious apple cobbler and Julie brought a gorgeous fruit platter. Other things were what we normally take. 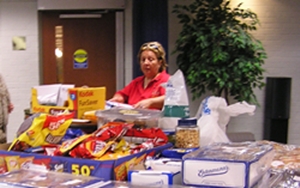 The pigs in a blanket worked out just fine! Julie made sure to poll the guys about them and the decision is to add them to the list for another time. We didn’t know how they would work so just did one package of hot dogs of them. They disappeared fast! We also did S’mores and the guys liked those, too. Instead of buying soda, this time we took assorted fruit juices and Gatorade and of course we had the Smoothies.

Just a little left over of the drinks, and the food leftover from the luncheon was disappearing FAST as we packed up and left. The guys were either late-comers or were fixing a stash for their rooms.

The Sergeant brought over a local church group that he was giving a tour of the hospital to. They are going to be doing what we do, had a few questions and I gave them some pointers. It took me away from helping with the set up and I apologize to Julie, Jean, and Jess for not being able to help. Once everything was set up the line formed quickly and the Crew was hoppin’!!

Jess did quite a few massages, Jean played pool with some of the guys, and Julie made the smoothies. We all had a chance to mingle with the guys and there were two gals there as well. One works behind the desk in the barracks, and the other took a box full of nifty gifties over to the guys on the hospital ward for us.

A lot of the Marines we spoke with said they probably won’t be there when we are back in October. Another one told me he and his wife just found out that they are expecting their first child and were very excited. It seems like the D.C. area is popular, too. Quite a few of the guys said they are staying in the area when they get out, at least for a little while.

It struck me once again when chatting with them, just how much their wives and children mean to them. Ask them if they are married or if they have kids and their eyes light up and they get a smile on their face…

Some people take their families for granted, I think. They do not…

For nifty gifties we had disposable cameras (we bought using the OTY donation), plastic canvas trinket boxes in patriotic and cammie colors made by Millie, a WW II Navy Veteran, donated Dunkin Donut cards from Chris, the pillowcases from Bayside Quilters, and the notes of encouragement from all over..

I left the afghans and the quilts home this time since I wasn’t sure if we would have space in the cars.

Guess who else was there? The “Mom with the Smile”! I knew who she was because I recognized her from Brenda’s picture, and she took food over to 5 East for the families.

Her son was back at Bethesda for follow-up surgery and she is as nice as the crew told me she was. I had missed the luncheon where they met each other this past spring. 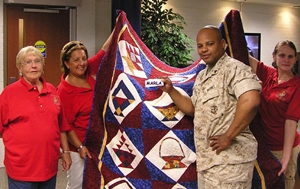 A Marine kindly drew the name for us in exchange for free food. (It was free anyway… he was being a good sport!) The raffle video ended up being one point five seconds long so we’ll have to settle for the picture.

Huge HUGS to everyone who participated in the raffle, enabling us to continue on with our mission.

Special Thank You’s to Terry, Bonnie, Mary Lou, Theresa, Jan, Mary Ann, Scott, and all of you other wonderful Elfs who helped spread the word about the raffle.

Special thanks to Chris and Bayside Quilters for their very generous donation of the beautiful quilt. We raised $1,206.00 for the luncheons!

And thank you to all of our other Elfs – each one of you makes a difference in ways you will never know.

Most especially – Thank You to Our Troops, Past and Present! We are grateful for you and we appreciate your service and sacrifices.