…except when your son is recovering from a crushed pelvis and other injuries acquired while training Iraqis in house-clearing and half of the house fell on him – third deployment.

Or your son returns home on leave safely after two deployments over there and then is involved in a very serious car accident at home.

Or you’re the girlfriend who flew in from far away the night before to spend the weekend with your sweetheart of a sailor, pushing him around in a wheelchair.

Or your husband’s not eating well because of mouth injuries but the beef barbecue the Marine Moms brought in for the luncheon tasted so good, you came back for seconds for him.

The Thursday morning before the luncheon on Saturday I was going through my MM-B luncheon freak-out – the menu had not been completely decided on and the gift bag shopping still needed doing. I still needed to call the Sergeant for a head count – praying we wouldn’t be playing phone tag up until the last minute or maybe not touching base at all.

The online store was *almost* up and I thought of yet one more thing that needed doing for it before it goes live. Those were just some of the things on the MM-B to-do list, not including the rest of the day to day things we all have going on.

So I took a few Chill Pills – aka Spicy Gum Drops. Love those things.  By that evening I had chilled out, the list was made, the menu decided, the plants came in and were planted with plenty of help, I put the gift bag shopping off until Friday morning, the Sergeant was a doll and called me back within an hour, and plans were made for Janelle and I to meet at Deb’s Friday afternoon to head out for the rest of the shopping and to meet Jean and Gladys back at the house to finish up the prep.

Sometimes I just have to freak out and get it out of my system, eat some Spicy Gum Drops, and then just take a deep breath and say to myself, “Ok, let’s just breathe and start all over again, Janie.”  All of those things are minor details though.

The major details are the families and the patients we do the luncheons for.

A mom at Bethesda told me that her son was going to leave the military when his contract was up. While he was recovering at Bethesda, he experienced first-hand all of the support and caring that is given to the wounded combat vets there.

He didn’t know until then that there was so much support for the military going on “out there”. He decided to reenlist.

Realizing that people DO care made it all sacrifice worth it to this wounded vet.

A Navy Mom with tears in her eyes thanked us for what we were doing. She said it was so nice to see the good things happening for the vets returning home. She and her husband are both Navy Vets from the late 60’s, early to mid-70’s and she said she remembers what they went through back then and is so thankful knowing, and seeing first hand, that her son isn’t going through the same thing.

And he isn’t going through it because of organizations like MarineMoms-Bethesda, Washington State Operation Thank You, Veterans of Valor, the Hugs Project, Rocky Mountain Military Moms, the Injured Marine Semper Fi Fund, the Yellow Ribbon Fund, Soldiers Angels, the Marine Corps Family Foundation, the Gold Star, Silver Star, and Blue Star Mothers, MarineParents.com, the Patriot Guard Riders, Move America Forward, Gathering of the Eagles, Rolling Thunder, the V.F. W.s, American Legions, Marine Corps Leagues, American Legions, Elks clubs, bikers’ clubs, businesses, military parents, spouses, and troop supporters, and then there are the older vets from past wars who are taking the newer vets under their wings.

They are just a FEW off the top of my head real quick who are supporting the troops in one way or another. The list could go on and on of supporters of our military who walk the walk and not just talk the talk. Every week I hear of a new group I had not heard of before. Every single one of them is impressive – someone saw a need and is filling it for our vets. Our military deserve it. The mainstream media hasn’t quite figured that out yet.
mmmm.. okay… Back to the luncheon. 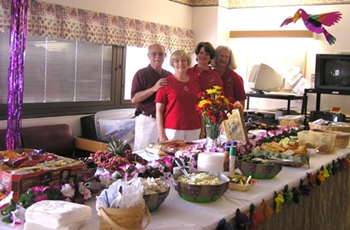 Wonderful food and we fed more than twice as many as we had planned for. I still haven’t figured out how that always seems to happen but it does.

Maybe the two large crockpots, one with beef barbecue from Robin and the other one with meatballs in tomato sauce and the 36 sub rolls cut in half from Janelle, as well as the gorgeous fruit platter from Deb were the reason. The cookies from Gladys’ friend were the icing on the… cookie platter (gotcha, didn’t I?), and the generous donation of Entenmanns’s from Dave were sure to cure those sugar cravings after we had packed up and left. Plenty of food for the patients, families, and staff.

Musical gift bags again from Karen containing pantry items bought with the help from WA State Operation Thank You. The Ladies Bags with the Arbonne lotions from Ann and Friends, and special books from Karen for the Moms and Wives were also a pleasant surprise.

As always, the t-shirts from Embroidery Friends were a hit.
The woman downstairs was great, knew just what to do to help – the cart safari, the correct elevator to use with the loaded carts – I think they know us down in the lobby now. 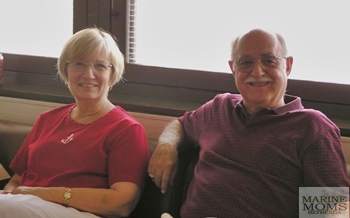 Gladys and Bob joined us for the first time and are planning on gcoming back with us again.

The Sergeant stopped by to meet us on his day off. It was nice putting a face to a voice.

It was a good day for us. Arrived to the hospital on time, didn’t get lost, other than in the parking garage this time and there were three of us going back to our cars together, so… nice to be in such good company and knowing I’m not the only one who gets lost in there. 🙂

A HUGE “Thank You” to all who made the day possible.
The MM-B online store will be opening soon. Here’s a sneak preview:

All the links on the store homepage do not work yet – like I said – sneak preview. All profits will go to the luncheons with a portion of the sales being set aside for future projects to benefit our returning combat vets. The Seahorse Protective Cases will be our first product going on sale.

We also have a local fall plant sale coming up in early October to raise funds for the luncheons. We’ll have pumpkins, mums, pansies, ornamental cabbages, straw bales, and cornstalk bundles. Should be fun. Still working out a few details with it. Like… I still need pumpkins and mums… it will work out though. I felt OLD when we potted up the pansies and cabbages. 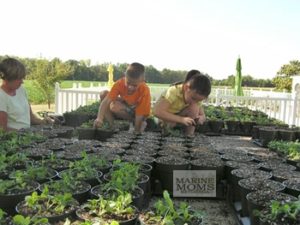 The two young helpers we had are claimed by one of my former Brownie Girl Scouts. And then Vernon said when I asked him if he would help out planting the baby pansies, “Sure, I’ll be happy to help you, if you help me at the Blood Bank next week.” A nice lady from the Blood Bank’s Human Resources department called me today to confirm my volunteer app. I’m not sure who got the better deal, Vernon or me. 😉 Thank you, Vickie and Friends, for helping MM-B with the sale.

Last but not least, I was interviewed on radio station AM 1070 WFLI of Lookout Mountain, TN a few days ago about MarineMoms-Bethesda. The station covers the greater metro area of Chat’nooga. Yes… I had to pop a few Spicy Gum Drops before I called in…’cause I think I talk funny. (When was the last time *you* did a recording and listened to yourself speak??? Mmm hmm, that’s what I thought.)

Here is what I was told about WFLI:
“WFLI covers an area from Chattanooga almost down to Atlanta, over to the North Carolina Mountains, and then up past Knoxville.  It’s on AM 1070, generally a gospel station but we’re on there from 3:30 until 5:30 Monday through Thursday. We don’t stream to the internet yet.”

The show plans to go online sometime in the future. Their focus is local and regional conservative issues and it is caller-based. If you live in the area, call into their show when they are on the air and say hi and tell ‘em Janie sent you, then maybe they’ll invite me back. (They didn’t ask me to say that.) If there is one thing I came away with from Saturday’s luncheon is that the more support our troops know they have and the more those who support them speak out, the better. It DOES make a difference to those who need to hear it the most –

Those who put their life on the line for OUR freedoms.
Links below for your surfing pleasure.

As always, continued prayers for our military and their families.

Congratulations on your wedding, Nate and Morgan!
Until next time…

Time to head back home. 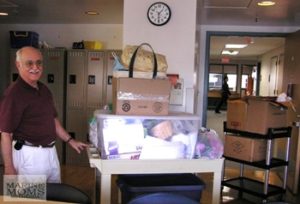 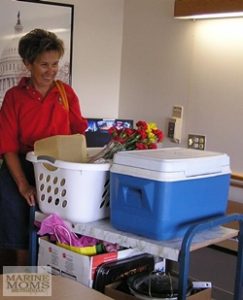 In April 2004, Nick Popaditch fights heroically in the battle for Fallujah and suffers grievous head wounds that leave him legally blind and partially deaf. The USMC awards him with a Silver Star for his valor and combat innovation.

Report from a Forgotten War – Oliver North in Afghanistan.

Helmand Province, Afghanistan – To Americans of my generation and older, Korea is “The Forgotten War.” For this generation, it’s Afghanistan – or to be precise, Operation Enduring Freedom (OEF).

Camp Bastion, Helmand Province, Afghanistan — This British-built fortress, perched on a plateau in southwestern Afghanistan, is well named. Surrounded by miles of open desert, the citadel has its own concrete runway, water supply, sewage, electricity, Level 3 Trauma Hospital, even fire mains — all constructed in the last 30 months.

Our Fox News’ “War Stories” team has moved to a former Soviet military base in western Afghanistan, about 50 miles from the Iranian border. We’re now with the 207th Afghan Commando Battalion and their U.S. Special Operations Command, Army and Marine counterparts.

An American Wedding Story (link no longer works) – Two Marines marry with the help from their Marine Family.

And from there I found this: