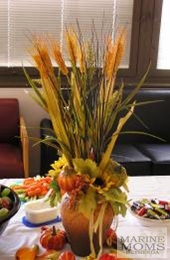 It seems like it wasn’t that long ago that Brenda picked daffodils for the table decorations and now here we have pumpkins, gourds and wheat.

Where did the summer go?

Robin suggested doing a potato bar with all the toppings for this month’s luncheon. Deb’s Chili, sour cream, chives, bacon bits, jalapeno slices, butter, cheese sauce and broccoli made for a meal in itself. Add in the California salad, the cheese and olive platter, the fresh fruit bowl, veggie platter, chicken soup, the special cookies and the Entenmann’s and wow. If you went away hungry it was your fault. 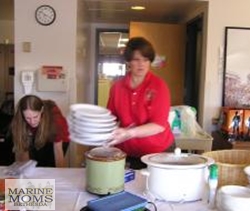 Robin finally slowed down enough that I was able to get a picture of her that wasn’t blurry,

Chili and chicken soup are in the crockpots.

“Hooks and Needles for Our Troops” sent us some afghans to hand out. 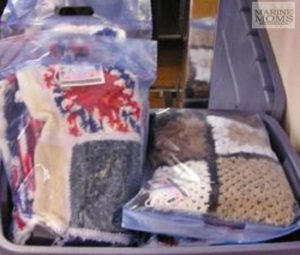 The brown one went to a Marine who was injured two years ago and was back at Bethesda for some follow up stuff. We loaded him up with the afghan and a t-shirt, a gift bag, an envelope full of encouragement and support notes from our note writers, and for his wife, the Arbonne goodies.  He is also a Vietnam Veteran. 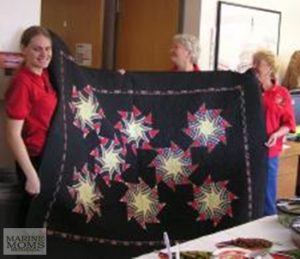 We met another Marine, too, and loaded him and his Mom up with all the goodies. Janelle was able to be there this time and she had a special quilt for him. 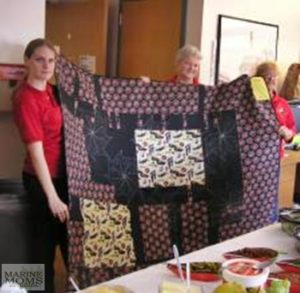 If you’re a quilter, you will want to see the back of it, too…

It’s made out of Marine fabric. Gorgeous.

The ward was pretty quiet as far as the combat vets go – this is good. A few days earlier it would not have been the case. Some had moved over to Walter Reed. A few years ago… the ward would have been full. Something is working “over there.”

It was interesting – hearing what Ramadi was like two years ago from someone who was there when no one could walk down the street, and knowing what it is like now.

It was fascinating – hearing how the hearts and minds are being won and the locals now go to the Marines asking for help with the Taliban in certain parts of Afghanistan.

It was much appreciated when the Sergeant came up to say hi – after being on a 24 hour shift with no sleep.

It was very touching – speaking with a new Marine Daddy who was visiting someone very special while his wife is back at the base with their new little one – across the Pacific.

I enjoyed standing outside the conference room making chit-chat with one of the Marines from the Liaison’s office. He had come up to fill some plates for the guys working downstairs. They take good care of each other.

There were the Lady Marines we chatted with, the Reserve Marine, the nurses, the Corpsman who explained his uniform to us.

We cleaned up, loaded up, and I went back into the Liaison’s office to say goodbye.

I told the Marine on duty how we would like to go back to Mercy Hall again and do another luncheon. He told me,

“Oh that would be an easy one to do. Hot dogs”.

We’ll be back there again… but it won’t be hot dogs.
Links below for surfing around.
And as always, continued prayers for our military and their families.
Love and Hugs,

A troop support organization that sends thousands of care packages to deployed troops and at Christmas time, stockings to the wounded warriors at the major military facilities. They could use your help if you are interested.

Warrior Care is a top priority for the Nations’ Defense Leaders. There is A LOT of news here that does not make the news of different things going on with wounded care.

“This is the strongest recruiting year we’ve had overall … since fiscal year 2004,” said David S.C. Chu, undersecretary of defense for personnel and readiness.

Notably, the Army and Marine Corps had raised their recruiting goals for fiscal 2008, as both services continue to grow their ranks to meet the demands of the wars on two fronts. In fact, the Army was the sole active-duty service to exceed its goal by a full 1 percent, recruiting 517 more soldiers than its 80,000 target.

And the service increased the overall quality of its recruits, its top recruiting officer said, and put more recruits into the pool waiting to join in fiscal 2009.

WASHINGTON, Oct. 9, 2008 – The Defense Department, in conjunction with the military services and the Department of Veterans Affairs, has created a framework to help wounded, ill and injured service members not only survive, but also thrive as they transition from military service back into their communities.

“We want them to really not only survive their injuries, but now thrive in what’s called often times ‘the new normal,’” said Lynda C. Davis, DoD lead for case/care management reform for wounded, ill and injured service members and their families. “We’ve been able to, jointly with the services and [Veterans Affairs], develop a framework to make that happen.”