And so are their families, at least the one we met at the latest MarineMoms-Bethesda luncheon was.

The men hung out with us Moms for most of the luncheon waiting for their Marine to come out of surgery and the women came in toward the end of the luncheon.

Wonderful family and so supportive of their Marine.

“OUR HERO” t-shirts that the girls had made and were wearing.

All were wearing a button with his picture on it. 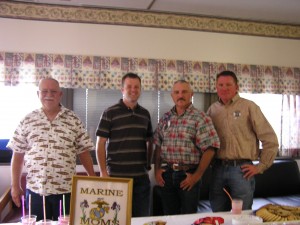 Granddad – 20 years in the Navy and no tattoos when he retired – said he came close to getting one once, back in the 60’s, but his friend went first and he had sobered up before it was his turn… and then… he got two just before his grandson deployed, one for him and one for his Marine.

Dad with a brand new “high and tight” and he said it will stay that way until his son comes home, has the appointment already set up with the barber back home for every week until then.

Mom is very connected online to other moms from her son’s unit, and she looks like she could be the Marine’s sister, NOT his mother!

Each one of them SO PROUD of their Marine.

Their hearts are as big as Texas, too.

Gentlemen – A huge “Thank You” from us Moms.

We had been asked to see if we could visit with a Marine who arrived there a few days ago and we did. He came down, had a smoothie with us, and chatted with the Texans for awhile. He’s receiving LOTS of support from people all over the country. The Corporal says he’s ready to head back over there as soon as the docs say he can. These Marines – I can’t say enough good about them. Oh… this Tennessee Marine now has a jar of that Tennessee honey we keep on hand.

I’m glad I had an extra jar for him. The jar that we had opened for the table was given to a sweet little girl who I saw drizzling honey over some biscuits. Some of the honey was poured into a bowl, so I gave her the jar with the rest of it and a bag of biscuits to take back with her.

Then there was the mom and daughter from Ohio, just in the night before to be with their Marine and the airlines had lost their bags. Bummed. Hopefully by now they have their luggage. These are just a few who came into the luncheon Saturday. 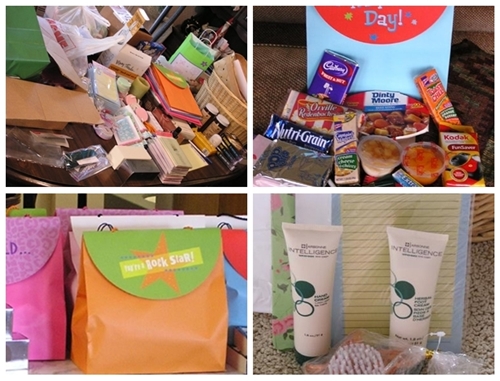 We loaded everyone up with gift bags and t-shirts, and we gave the moms and wives a special bag just for the ladies with the Arbonne goodies in it that Ann and Friends had sent us last winter.

Sometimes I am such a dork… tried giving a bottle of Arbonne shaving gel to a Marine’s Dad… he was about 8 feet tall, and he looked down at me and said, “Now do you really think I need that?” heh. Yeah… he had a beard. But he said his son would enjoy it.

Instead of leaving the pantry items in the pantry, we put them in the gift bags this time. Now these gift bags, what a hoot…. Marine Mom Karen sent them to us. Open the flap and *surprise!*  Music plays. Perfect size for what we were doing and we had fun with them – from Deb’s husband playing along with them as I was filling them Friday night, to one of the bags playing in the elevator on the way up to the hospital floor, to the families getting a kick out of them.

We had crockpot meals this time. Meatballs and kielbasa in tomato sauce with peppers and onions in one, with rolls to make subs; Italian chicken in another with rice as side to go with it, cheese, olives, pepperoni and crackers platter, potato salad, deviled eggs, chips, fruit bowl, cookies and Danishes, smoothies, soda, and fruit juice. I didn’t take a picture of the table before we began serving, people were hungry and ready to eat.

One of those Marine Elves sent the embroidered logo to us and I had it framed for the food table. The Irises represent Honor and Valor in honor of those we do this for – the OEF/OIF combat vets.

Robin made up a sign for us to hang on the doorway and we attached the list of the day’s luncheon sponsors to it. The picture’s below.  We like people to know who has helped us. They make the luncheons and all we do possible and we appreciate everyone’s help so much. Thank you.

And many thanks to the Liaison staff who allow us to do the luncheons.

There are some links below the picture. 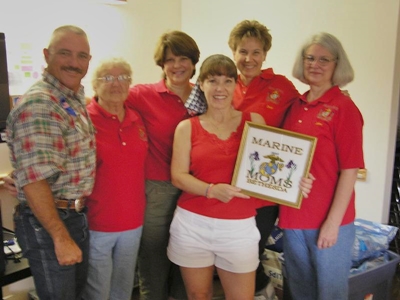 Surfing around for Texas clip art, I found this from TexasOnline, the state’s website. It has information for Texas veterans.  https://veterans.portal.texas.gov/

A Florida group supporting the Marines in Iraq and Afghanistan is here. We were able to meet a Marine they are supporting and pass on their well-wishes to him.

One of the things I am hearing repeatedly from guys who have deployed and come home is that the news does NOT cover the GOOD things happening “over there”.

A local soldier in Iraq writes to his hometown Georgia newspaper.

There is also a special section there for military wives as well as all kinds of other things.

That’s it for this month.

Oh – in case you were wondering –

NO we did not get lost this time!