A few days after our March luncheon, I asked the Moms what they thought about changing the venue of the luncheons. We had met a Marine who hung out with us that day and learned he lived in Mercy Hall while waiting for his medical discharge.

We peeked out the window.

“How many of you guys are over there?”

“I’m not exactly sure, somewhere around…”

Wheels began spinning in our minds…

It was a unanimous vote – let’s see if they’ll allow us in Mercy Hall for a luncheon.

You see, the surge is working. We see this first hand on the hospital ward at NNMC.

Our mission is to serve the recovering OEF/OIF guys and their families at Bethesda and we were finding that we were serving fewer and fewer combat vets.

We decided to do this luncheon in the middle of the week, another first for us.

Deb and I shopped the day before, did some prep work, had dinner and then Jean came over and helped put the gift bags and goodie bags together. Good sports because they both had to be up very early the next morning for work. Bobby and I were up ‘til about 1 AM getting the rest of the stuff ready. Who knew it would take so long to cut up 2 watermelons and fold notes? 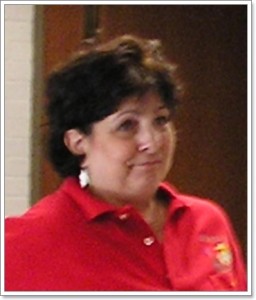 Up early the next morning, Julie arrived after fighting the morning rush hour traffic to get to Deb’s on time. We loaded up the two cars and off we went. Bob navigated using the map I had remembered to google and Julie followed us.

And we didn’t get lost. Heh. 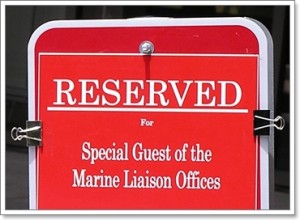 We arrived at Bethesda a little after 10 AM, checked in with the Liaison office and were shown where to go to unload. Once we were through with that, with the help of some Marines and Sailors, the Corporal had a parking place in front of the hospital for us which was very thoughtful since parking is at a premium during the week. 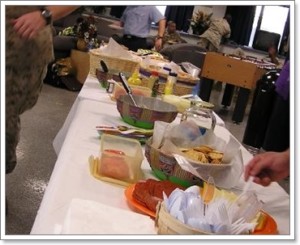 Two tables were already set up in the lobby, which is more like a common room, and they brought us one more table plus a tablecloth for it as the food kept coming in. A Sailor hovered around as we unpacked and offered his help so we put him to work cutting the cake and apple pies. The staff was sooooo helpful to us. Thank you ALL!

The Liaison Marines invited the families on the ward to come on over to fill a plate. One of the Marine Moms did come over. Julie and I talked with her for awhile, loaded her up with a gift bag, a lady’s goodie bag, t-shirts for her and her son, and we had take-out boxes for her to carry the food back over.

Part way through the event I saw someone out of the corner of my eye arrive – she was wearing a white shirt that had a logo on it and I wondered who she was. A few minutes later, Cpl. H. called me over. That’s when I saw what the logo said. “Janet?! I’m Jane!” It was Janet South of Veterans of Valor. She and I have been emailing each other occasionally, hoping to meet for lunch sometime when she and Kyle were in the area. Neither of us knew the other would be there that day.

Funny how things work out, isn’t it? 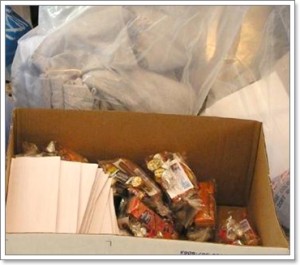 Julie was busy handing out goodie bags and “These Colors Don’t Run” t-shirts along with the notes well-wishers had sent for the guys, chatting with them as they came in for lunch.  The goodie box was full when we got there and the guys really liked the t-shirts.

The menu was pretty much what it’s been in the past. Pork barbecue, sandwiches made on croissants, cheese, crackers, and pepperoni tray, potato salad, chips, pickles, the sweetest watermelon a Sailor said he has tasted in a long time, apple pie and cake; smoothies, Gatorade, Mountain Dew, and Coke. 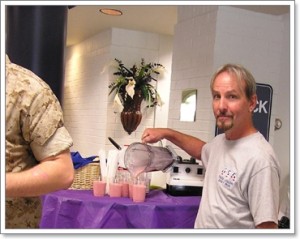 Bob has helped at Deb’s house when we were getting ready for past luncheons.

Since she couldn’t be there this time, Deb taught him how to make the smoothies.

I don’t think he would look quite the same in a hula skirt as she does, but that t-shirt sure does look great on him. That’s the kind we give out to the guys. 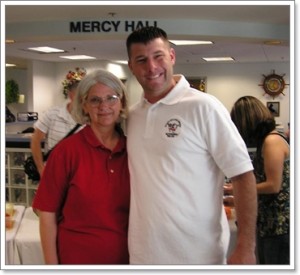 Toward the end, Kyle South came in and met us,had lunch and about the time we were packing up, their group headed over to the hospital to pass out their backpacks, and they very kindly took our gift bags, notes, and the gifts for the ladies with them to pass out for us.

We loaded up and headed home, following the map backwards. About 10 minutes from Deb’s I was telling Bob what a great navigator he was – we didn’t get lost. Then he said “Go south” and so… I went… uh huh… yep… you guessed it… “north”… and then there was this big ol’ “Welcome to Baltimore” sign. Aw maaaaaaaaaaaaaan. I did it AGAIN………… :p And ya cain’t just make a U-ie… ya have ta take this exit and that exit and then we finally got turned around and Bob knew right where we were and got us back to Deb’s. Whew! I’ll be glad when Janelle’s able to go with us again. When she’s with us, these things don’t happen.

We met Marines from Michigan, Iowa, New Jersey, and Mississippi. Those are just the states that I can remember. We met a few who were checking out that day to go home. They get a nice lunch; we get soooo much more… On my drive home that afternoon all I could think of was how proud I am of the Marines we met, and how proud I am of my son. Remarkable young men.

Many thanks to those of you who helped make today happen. You are appreciated more than you will ever know.