Perhaps one of the things a Marine Mom will never forget was when their son or daughter told them they joined the Marines.

And so the new journey began…

And if I knew then what I know now, I would still say, “You have to do what is right for you.” I think there is a “Warrior Spirit” inside of a Marine that was there at birth.  It isn’t for everyone, is it?

Today is the 243rd Birthday of the United States Marine Corps.

“Some people wonder all their lives if they’ve made a difference. The Marines don’t have that problem.”

And Families, thank you for supporting your Marine. It means so much to them. 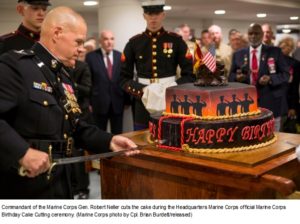 Each year the Commandant of the Marine Corps shares a Birthday Message with his Marines.

A Message From the Commandant of the Marine Corps 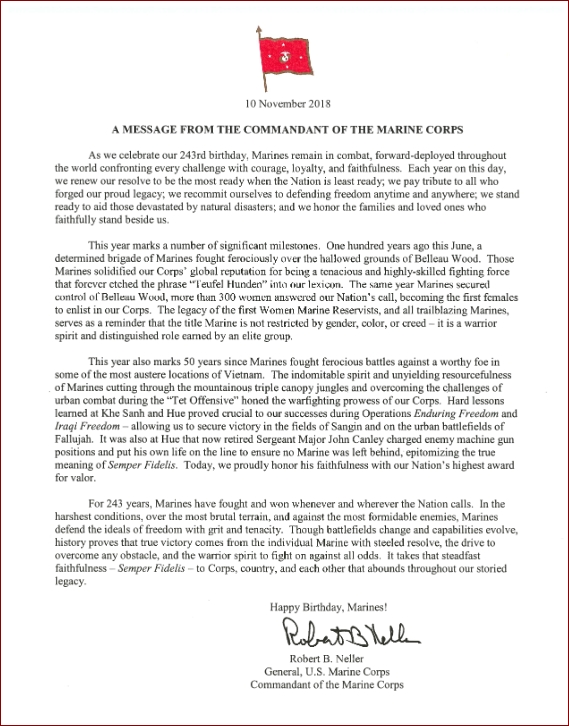 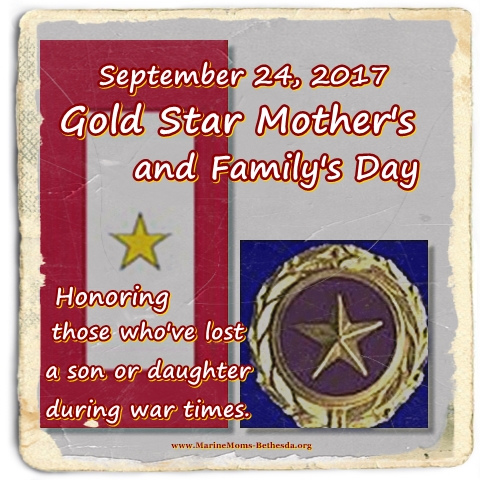 We have friends whose sons came home with the American flag draped over their coffins. They are “Gold Star Mothers”. That’s what the Gold Star in the banner above represents – a son or daughter lost during war time. You might see it hanging in a window at their home or as a sticker on their car.

Gold Star Mothers sometimes wear the pin you see in the picture.  It’s actually called a “lapel button”, not a pin. It’s small, maybe you have to look twice to notice it. Sometimes the Mom will turn it into a necklace.

A SMALL reminder of the HUGE sacrifice paid by their child while in service to our country – your country and my country.

We hope you will take a moment to stop, pause, reflect on, and honor the sacrifices paid by those who have made this country great, and remember the loved ones they’ve left behind.

Their pain is deep, their courage is strong.  Our hearts are with you this day and every day. 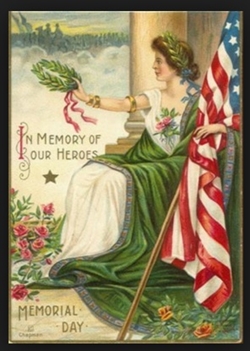 Have things really changed that much since May 30, 1868? END_OF_DOCUMENT_TOKEN_TO_BE_REPLACED

Honoring and remembering the sacrifices of Mothers who have lost a son or daughter to war.

This is an email a Gold Star Mother, whom I’ll call “A.”, sent to me in 2006 after I asked her for a note for the condolence book I was putting together for a Mother whose son was coming home by way of Dover Air Force Base… in a flag-draped casket.

Subject: Do I tell them?

What do I say to her on the loss of their son? Do I lie to them to try to make them feel better? Or do I tell them the truth and what lies ahead?

Do I tell them about the nights they’ll listen for his footsteps on the porch and wait for the door to open? Do I tell them when they go to bed at night, they’ll pray that when they awaken in the morning they’ll find it was all just a horrible dream, or pray that they don’t wake up at all?

Please tell me, what do I say to them? My heart breaks for them, and all I can say is, “I know what you feel, I understand and I know the depth of your pain.”

As my heart broke and the tears flowed for both of my friends, whose sons’ had died under similar circumstances in Iraq, I didn’t know what to say to her…

“A.” had lost her son, a Marine, in 2005 near Karmah, Iraq. Almost a year later the grief was still there as if it was just yesterday when the car pulled up in front of her home with the Casualty Officers bearing the devastating news about her son’s death.

Since 2001, at least 6,820 active duty Marines, Sailors, Soldiers, Airmen, and Coast Guardsmen have lost their lives while serving our Nation. Some during combat – hostile and non-hostile, and some during their recovery from war injuries. This number doesn’t include DoD civilian employees who were in the combat zones, nor does it include Veterans who died after completing their military contracts who served during this time period. I don’t know if it includes active duty stateside deaths during training or after duty hours.

In Operation Enduring Freedom (OEF), according to the above site, from 2001 thru September 25, 2014, and including Afghanistan, Guantanamo Bay (Cuba), Djibouti, Eritrea, Ethiopia, Jordan, Kenya, Kyrgyzstan, Pakistan, Philippines, Seychelles, Sudan, Tajikistan, Turkey, Uzbekistan, and Yemen, there have been 2,342 US military deaths.

But that doesn’t bring the sons and daughters we loved before they were born, back to us.  Does it?

The following organizations are just a few supporting our Gold Star Families.