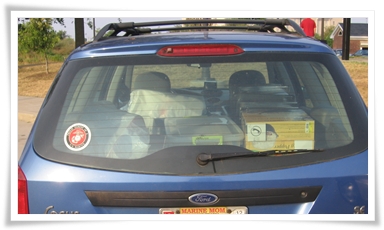 Headed SOUTH of the BORDER!  To Richmond VA Medical Center!

Did you know some of the patients from Walter Reed head on down to Richmond VA Medical Center aka Hunter Holmes McGuire Medical Center for further rehabilitation?  The medical center serves active duty combat patients on the Polytrauma, Spinal Cord, and PTRP units.  Family members stay in the Fisher House within easy walking distance to the facilities, or in hotels in town. Sometimes the patients are transported 121 miles to Walter Reed for additional surgeries or other medical care during their stay at Richmond.

We met a little before 9:30 AM in the parking lot and called Paulette and the Gunny to let them know we had arrived and then they come down with carts to help us unload.  While we were waiting, we talked with the Vets sitting outside getting some fresh air.  One we spoke with Sunday was an Army Veteran who had been with the 1st Infantry Division in Vietnam.  He told us he comes down every morning to feed the birds, then asked us if we could help him figure out his cell phone.  Well, we tried…  I think Kathy was able to help him.  Sarah arrived soon and Mary Allen was right behind her, on her way to church, to drop some things off for us.  Carol and Harry were not far behind. 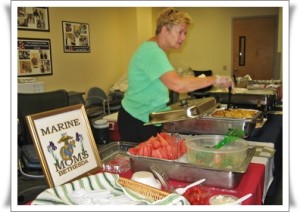 The tables were set up when we got up to the room.  The red white and blue tablecloths were a nice touch. We moved some of the tables around to suit the way we planned to serve.  Main buffet table, then sandwich fixin’s and desserts on another table and on the third table we had the soup, the popcorn popper and the smoothie maker.

About the time we were ready to serve, Warriors, some with family members, began coming in.  One of the Soldiers’ moms asked me if we had been at Walter Reed.  I told her, yes, we do luncheons there monthly, and are at Richmond about 4 times a year.  She told us they had been to many of our luncheons at Walter Reed.  They are from North Carolina and her son’s whole family was there visiting – Mom, Dad, Aunts, Grandmother. 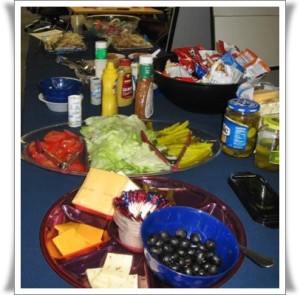 The Gunny brought up the microwave so we could heat the gravy and Paulette brought us ice to ice down the drinks and water.  The menu was roast beef and gravy, ham, chicken salad, and rolls and biscuits if they wanted to make sandwiches.  Potato salad, watermelon, tossed salad, potato soup, macaroni and cheese.  To top the meal off were blonde brownies with chocolate chips and pecans, marshmallow brownies, and peach pie.

Harry took care of the smoothies.  With the recent weather being so hot, they were a nice cool, refreshing drink. When he got down to the last little bit, not quite enough ingredients left to make a pitcher, he added some watermelon to the strawberries and yogurt and got a Thumb’s Up from the NC Soldier’s Dad.

The desserts were incredible.  I’m not sure what was the most popular, the marshmallow brownies or the pecan-chocolate chip blondies. 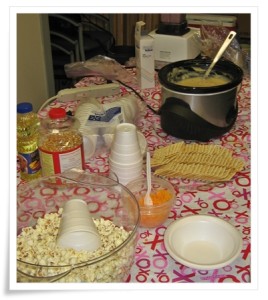 The atmosphere at the Richmond luncheons, after the initial setting up, is much more laid back than the 4 East luncheons.  With tables and chairs in the room, the families and patients are able to sit down and eat in the room with us, and we’re able to sit there and chat with them.  Paulette had music playing on a CD player.  One of the Soldiers’ wives was there with their two little ones.  The 4 year old entertained us with his dancing.  An Airman entertained us with stories of when he was deployed, not just in Afghanistan, but in Desert Storm.  The get together was nice, almost like having Sunday dinner at home with friends, except they are so far from home…

We gave the Gunny the “Warrior Song – HARD CORPS” CDs and t-shirts to give to his Marines that an Elf and the Warrior Song Project  sent to us.  We handed out the note packets to all of the Warriors.

Then the Gunny surprised us with a Certificate of Appreciation.  That was really nice. Thank you!

We began packing up at 1300 and were on the road by 1430   Leftovers were packaged into take out boxes for later with Paulette and the Gunny’s help.

To our Supporters, thank you!  We could not do the luncheons without your help.  Time goes on, the war goes on, and you continue to support our Nation’s finest though Marine Moms-Bethesda.  Your donations directly support the Warriors and their families who have sacrificed so much in defense of our country.  There is no middleman taking a percentage of the funds, there are no administrative costs – these are out-of-pocket expenses for our volunteers, 100% of the donations directly support the luncheons.  NO one is making a profit off of the unfortunate circumstances our Marines, Sailors, Soldiers and their families find themselves in, and our volunteers do this out of a sense of stewardship and love for those so far from home learning to live their “new normal”.

To those we serve, never ever feel you are alone.  If you need anything, just ask.  There is help available for so many things you may need, from adapted homes to watering the plants at home while family is with you, but no one knows you need something if you don’t ask.  We honor you and are grateful for the opportunity to give back just a little to you for your service and sacrifice.