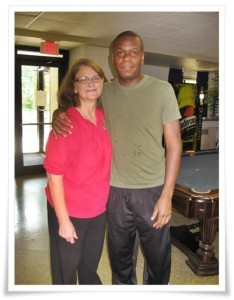 Mercy Hall is a small transitional barracks for out-patients with the ability to live on their own, and is also for wounded Warriors on medical hold (med-hold for short) waiting for their discharge from the military.  In most cases the residents of Mercy Hall do not have family members staying with them.  We have seen a lot of changes at Mercy Hall over the past four years.  The barracks used to house mostly Marines and a handful of Sailors, maybe a Soldier or two.

Since the transition of Walter Reed over to Bethesda the service branches living there are more diverse.  We are now serving about a third the number we used to serve at Mercy Hall.  The residents are on internships, have classes either on base or at a college off base, have doctors’ appointments, field trips… they are kept very busy!  And this is a good thing.  It gets them out of their rooms and in some cases like with the internships, takes them out into the civilian world preparing them for jobs and for the day they are discharged.

This month’s Mercy Hall luncheon was extra special (but then they ALL are!)

It began with a trip to the post office on Wednesday, the day before the luncheon, and finding a package pick up notice that had to be signed for.  Now if you follow Marine Moms-Bethesda on Facebook, you will know every once in a while I post a YouTube link to The Warrior Song – HARD CORPS.  Why? Just because I LIKE it!

Guess who the box was from? 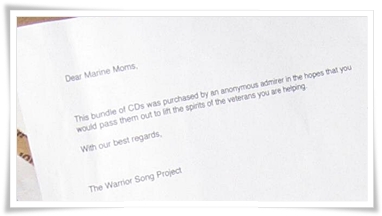 Inside of the box was a note:

Dear Marine Moms,
This bundle of CDs was purchased by an anonymous admirer in the hopes that you would pass them out to lift the spirits of the veterans you are helping.
With our best regards,
The Warrior Song Project

Wow………… not only were CDs in the box, but DVDs and t-shirts!

You can check The Warrior Song website out here.

A little about a few of the Marines who received the generous gifts:

One has been a resident of Mercy Hall for two years, told us he has finally finished all of his surgeries and just recently received his med hold paperwork.

A third Marine has been there at least 6 months and asked for a second t-shirt for his older brother who is a Marine now out of the Corps, so we gave him one to pass on.  (How can a Marine Mom say “no” to one of our Semper Fi Guys?  She can’t!  And we didn’t think the donor would mind us doing this.)

Following the recovery of these and other Marines has been extremely humbling.  The opportunity to serve lunch to them at Mercy Hall every other month is a true honor, and a privilege we Moms do not take lightly.

The menu was pickles, meat lasagna, veggie lasagna, chicken salad sandwiches, cucumber salad, tossed salad, watermelon, cantaloupe, grapes and apricots, assorted rolls and bread, pretzel/Rollo/pecan thingies, blueberry cobbler, and assorted drinks.  The meat lasagna, chicken sandwiches, pretzel thingies, and cobbler were the hits of the day!  Several of the Marines stocked up with the lasagna for later.  Most of the veggie lasagna went “home” with a woman Sailor.  Other leftovers were left in the fridge and if not perishable, on the table for the residents.

Katie went over to the hospital ward to invite families over and I held the fort down.  She makes the luncheons look easy.

Some ARMY STRONG Soldiers joined us, both men and women, as did two Corpsmen, all of them injured in the war.  Love ‘em all!

I asked one of the Soldiers what he liked and he said, just like all of the guys do, “I’ll eat anything!”  “No, what do you really like? What do you eat when you go home on leave?”

I promised him we would bring him a sweet potato pie when we are back in August, and if we don’t see him, we’ll put his name on it for when he gets back later that day.  Steaks, however, would be a stretch for our budget… 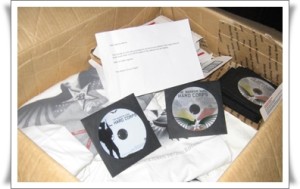 The t-shirts and CDs were awesome and a great morale booster.  Thank You to whomever sent them, and to the Warrior Song Project for being the intermediary for this random act of kindness.

And if anyone is wondering, one “Elf” did come to mind and when I asked him if he had anything to do with it he said,

“I have absolutely no idea who might have done such a thing…
Besides, even if I did… wild horses couldn’t drag it out of me.” 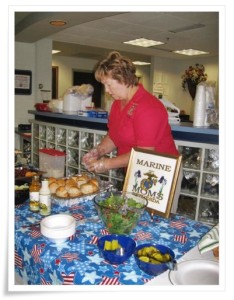 Thank you to the staff at Mercy Hall for their help getting the word out about our luncheons and for helping us unloading and loading the cars.  Katie, thank you for your help making the luncheon a success! You all are great!

Our annual quilt raffle is going on.  The drawing for “Stars and Bars Forever”, donated by Bayside Quilters of Easton, MD to help raise funds for the luncheons, will be held August 16 at our Mercy Hall luncheon.  100% of the funds raised from the raffle will directly support our luncheons.  Tickets are $1.00 each or 6 for $5.00.  The picture does not do the quilt justice!  It is gorgeous, and the quilters hand-quilted it this year.  Thank you, Bayside! 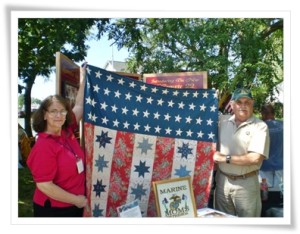 Thanks also to the Chesapeake Bay Chapter of the Antique and Classic Boat Society for space in their vendors’ area at their Silver Anniversary Show at the Chesapeake Bay Maritime Museum last weekend.  Jim and Guy stopped by to see us. Jim, thanks for sharing your picture! It was great to see you both!