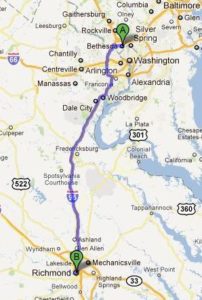 One of our visions for Marine Moms-Bethesda has been to expand our mission to other military hospitals and VA medical centers.

We knew patients from Bethesda sometimes were moved to Hunter Holmes McGuire VA Medical Center in Richmond, Virginia to the spinal cord or polytrauma unit for the next step on their long road to recovery.

Last summer we learned about PTRP from Marines at Mercy Hall who had spent some time there.  With some of our volunteers living closer to Richmond than they do to Bethesda, this seemed like the next logical step for expansion.

Where there are wounded Marines, there is a Marine Detachment. There is a saying, “Marines Take Care of Their Own” and this extends to the Marines injured in war at VA hospitals.

It was good to see there is also an Army Liaison at Richmond VA Medical Center and nice to know that the Marine and Army Liaisons work together as needed to bring the best possible experience to all of our Warriors and their families.

I made contact with the Gunnery Sergeant and he was enthusiastic about a possible luncheon there.

“I take personal gratification in knowing that our Marine Corps community continues to run deep in the welfare of wounded, ill and injured Marines along with their families.”

We set a date, and early in July, Janet and I drove down to Richmond to tour the facility to see if hosting luncheons there would be feasible.

We were shown the polytrauma ward (gun shot wounds, burns, and multiple injuries), the spinal cord ward, and the Polytrauma Transitional Rehabilitative Program unit (or PTRP, pronounced p-trip for short) where wounded Warriors, all service branches, live in a residential setting as they learn to live on their own, mostly low to mid-level amputees and/or cognitive issues due to brain injuries.

We learned that the families of the combat patients on the hospital wards play a vital role in their loved one’s recovery and are included in every step of the recovery process.  Once the patient moves over to PTRP, family members may visit them on the weekends.

The Gunnery Sargeant showed us different areas in the medical center where events from small to large could be held, indoors and outdoors, and best of all, to our delight – OH JOY! – there were kitchens we could use!

We decided to host our first luncheon at the PTRP unit.

Janet and Lew coordinated it and early Sunday morning Elizabeth and I met at their home to caravan down to the hospital with Diane meeting us on the way.  We arrived, called the Liaison office, and began unloading.  The Staff Sargeant, his lovely wife, and the Lance Corporal came over to help us set up.

The SSgt’s wife was wonderful – first thing she said was, “How can I help?”  It turns out that when she and her husband were stationed in Hawaii she did the same thing with another group – served meals at the hospital there to the wounded.

The menu was a Southern Sunday dinner. 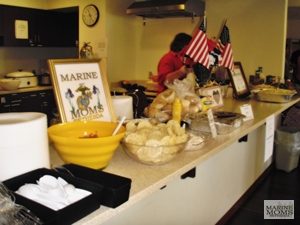 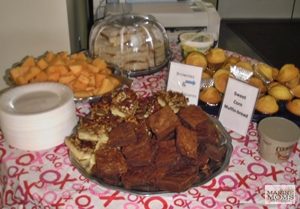 We set out the stash table items on top of the pool table.  DVDs from Mary’s fire fighter friend in New York City; soft, cozy hand-knitted slippers from Carole in Michigan. 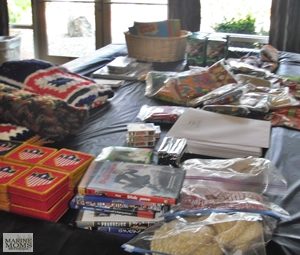 We still had afghans from Esther’s Ladies so took some of those; pillowcases from Bayside Quilters; Millie’s trinket boxes; counted cross-stitch kits for moms and wives; coloring books and crayons for the little kids.  And of course we had the encouragement notes to hand out.

The living space at PTRP is divided between a dining area with several round tables, a pool table, and then a seating area with couches, chairs, bookcases and a television, all looking out onto a patio area.  The SSgt let the families at the Fisher House and on the hospital wards know we were there.  The patients who were cleared to leave their ward came over with their family members.

People began arriving around 1100 and we began serving around 1130.  The LCpl. fixed take-out boxes for the combat patients on the spinal cord and polytrauma units who weren’t able to join us.

There were two Marines and their families who had been at Bethesda whom we remembered. We met families from Boston, Pennsylvania, Louisiana… Marines, Soldiers and Sailors, one wearing a Special Ops t-shirt…

Food – oh my gosh we had so much food.  We weren’t sure how many we would be serving so guesstimated on the high side.  Leftovers were put in the refrigerators at PTRP and the hospital wards for later.

The hit of the day?  Not sure.  One Soldier filled a take out box for later with lots of chicken and potato salad, another took extra cornbread back to his room.  Someone commented that the brownies were the best they had ever had, and the pecan squares, well… luscious almost to the point of sinful and people kept coming back for seconds and thirds of those.

This luncheon was very different from 5 East and Mercy Hall.  On 5 East the bandages are still covering the wounds.  At Mercy Hall the residents are living on their own in the barracks, recovering before returning to their unit or are waiting for their medical discharge.

At McGuire are “the in betweens”.  Bandages are off and scars are healing.  Patients are recovering between multiple surgeries (some go back and forth to Bethesda on a regular basis for follow-up surgeries), before they are healed enough to receive their prosthetics or before they have to make the decision to have the leg they’re trying to save amputated, doing all they can save it.

The doctors work their medical miracles, while resilience and determination drawn from deep within enables the patients to stay the course and press onward during the recovery process.  The families, leaving jobs, family and home behind, support their loved ones 100%. 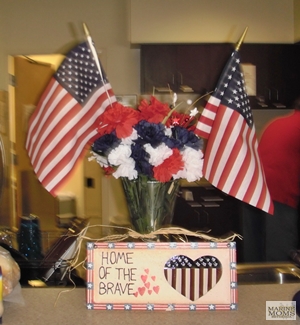 It was an honor and a privilege for us to serve lunch at PTRP.

Our thanks go out to the Nurses at the PTRP unit and Mrs. SSgt. for their help, and to the Marine Corps Liaison office for allowing us to come in and serve lunch, and for their help while we were there.

Special Thanks to Washington State Operation Thank You and to our dedicated “Elf” Jill for their help in funding Marine Moms-Bethesda’s first visit to Richmond VA Medical Center, and to Sarah and Mary Jane, who weren’t there but helped behind the scenes.

To the families and patients… The Mission now is to recover.  We hope to return again soon.  Looking forward to seeing those of you again that we met who will still be there.

If you are interested, this is a 28 minute video of two incredible success stories about a Marine and an Airman who recovered at the Polytrauma Rehabilitation Unit at Richmond VA Center.  “From Surviving to Thriving”

The video will give you an idea of what the patients, staff and families go through during the recovery process.  Don’t whine in front of me about a bad hair day, okay?  Seriously – this puts everything into perspective for me…

Today’s Luncheon Crew:
Janet, Lew, Diane, and Elizabeth
Thank You! Job Well Done!
Until next time, continued prayers for our military and their families…

“Valor is stability, not of legs and arms, but of courage and the soul.”  ~Michel de Montaigne