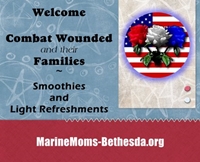 Back In January as we were ready to leave Bethesda after the luncheon, the crew expressed an interest in visiting the hospital ward more often.

The luncheons really do lift the spirits of the patients and families.  The visits break up their day, gives them someone different to talk to, and they leave with a full belly of “real” food.

I threw the idea out to all of the volunteers and there were enough interested in the idea that we decided to do “tweeners” – not a full “all out” luncheon – just a quiet, laid back visit with 3 or 4 volunteers serving light fare, drinks, and smoothies.  They are scheduled on 5 East during the months we do a Mercy Hall luncheon.

Janet, Lew and Katie hosted the first one.  Janet, thank you for sharing your pictures for the webpage!

It began Semper Gumby, so like all good Marine parents (and at the suggestion of the very kind security guards), they adapted and 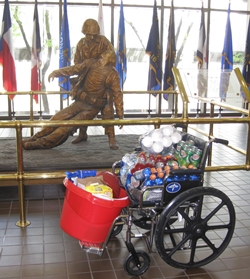 overcame the lack of a cart to wheel the stuff they brought up to the 5th floor.

This is the statue in the main lobby of the hospital. The wheelchair you see is the kind the Warriors use first, once they can be up and about.

Janet and Lew arrived first, unloaded, then Katie arrived and Lew helped her while Janet began setting the room up.

It doesn’t take long for folks to scurry to the room, as the smell of brownies and veggies and sweet cantaloupe waft through the air.

One woman stated, “We’ve learned to follow our nose to this room.”  She was the mother of a double amputee/legs and was leaving shortly to fly back to Texas.  Her Marine would follow her in a few days as he was being transferred to Brooke.

One of the nurses, I forget what country she said she was from, stated the smell of the cauliflower and broccoli were comforting to her as well as a few of her patients.  They had asked her to see if it was cauliflower and bring some back to them. 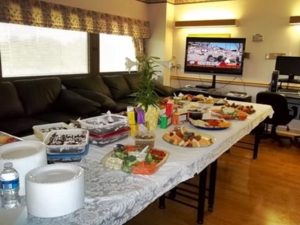 An Army mom whose son was injured in 2009 has been attending MM-B luncheons a long time.  Her son was on his 10th deployment when he stepped on an IED; TBI and many, many, many trips to Bethesda and Florida.  He came in with her the first time. 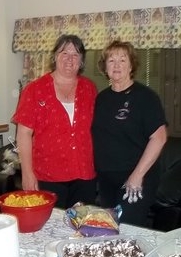 We laughed along with a Marine Mom and her ‘boyfriend’. I can see how his sense of humor keeps them all going.  We chatted several different times.

Kate and I had the honor of visiting a bit with the Sergeant and his family from Washington State.  The Sgt. is such a sweetheart of a Marine.

I left the other goodie-bag with a nurse whom I knew from last year.  She was personally going to deliver it to the family.

There was a Mom whose son went outside for the first time in over 2 months.  She told me when he was outside, he looked up and closed his eyes and a HUGE grin came over his face.  He was loving the sunshine.  She filled her plate with the fruit and a few brownies. 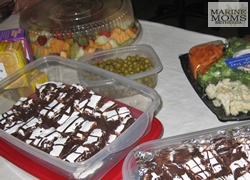 Blonds have more fun!!  Well, I don’t agree but Rick Larrimore, a Rod Stewart impersonator, believes they do.  He was going around to the rooms handing out magazines and doing photo opts with the patients.  You just never know who you’ll run into at Bethesda. 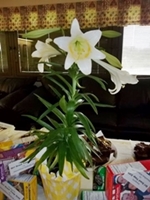 We had fruit trays, veggie trays, trays of cheese/meat/crackers, brownies and cookies, plus the GS cookies.  Plus the smoothies which I made for the first time … so easy and fun.

We left the lily with the nurses’ station.  Some of the leftovers were left in the pantry and Katie took some over to Mercy Hall.

Thank you, Janet, Lew, and Katie for devoting a beautiful Saturday to serve the wounded Warriors, their families, and the staff at Bethesda. 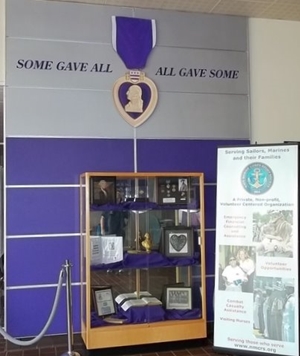