Well… not really… it was October 2005 when Janelle and I first visited Bethesda.  I often wonder how Shawn is doing.  Now I know, found his “Alive Day” video on You Tube.  God is Good.

Another Marine we met on one of our first visits just received his final paperwork and is officially medically retired.  It took 5 years.

Then there is the Marine from Massachusetts, the only survivor out of his group of nine.

The Corpsman who was awarded a Bronze Star.

There was a Lieutenant who was in a wheelchair being pushed by his Dad and was so polite to Janelle and me, asking us about our sons.

The Marine in his Santa hat with the little Purple Heart pin on it; the hat was covering the surgical scars  from the head injury from an IED blast.  They had run or of the real Purple Heart medals.  I hope he finally received the real one. There were so many casualties they ran out of them.  Some never have, from that era of the war.

Just a few we met from the first year, 2005,  when it was just Janelle and me visiting while our sons were on their second deployment.

by emailing it to (email address no longer active).

We will format the notes into a word document and hand-deliver them at our next luncheon. We do not use the same notes over again because we see some of the same faces from one visit to the next.

Thank you for taking a moment to let someone who has put their lives on the line to protect your freedoms know they are NOT forgotten. 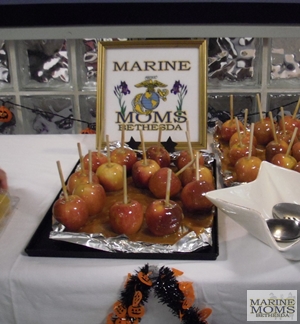 My camera’s battery fizzled out and I didn’t get a picture of the table after it was set up.  I did get pictures during the set-up though.

We had trick or treat bags and lots of Halloween candy, quilts and snacks and a musical singing cat and witch.

Here we are with some of our friends. 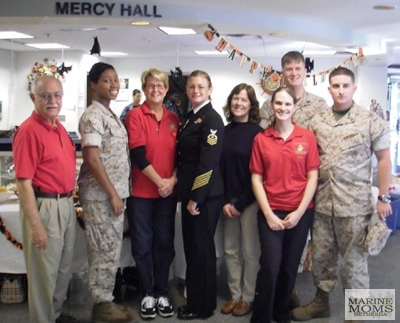 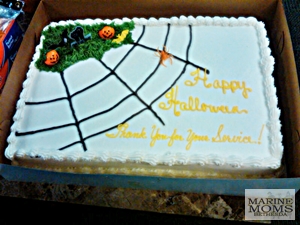 Hall luncheon. Bob and Jess held down the fort while Elizabeth and I delivered a cake sent by Sue by way of Julie to leave in the day room, along with notes and nifty gifties for some names that had been passed on to us by friends.

Susie had some Navy people join her who had quilts from Indiana to give out.

None of us meant to stay over on 5 East as long as we did. We enjoyed speaking to the different people we met.  One of the Marine moms we met would like to pass on to others:

“Send LOTS of baby wipes. There is no running water where many of the Marines are and this is their only way to clean up.”

“Watch those cuts and scrapes. Take them seriously, especially if they begin to change quickly. If they do, get medical care for them.”

Her son developed a flesh-eating infection. A cut on his elbow turned into something really bad within three days. He was at Bethesda recovering and will be fine after the skin grafts heal, then will head back to work!

It’s a busy place on 5 East. I’ve put a call out to Bayside Quilters for wheelchair bags. I remember when I used to turn them down when they offered them… I miss those days…

Please keep the patients, families and the staff that care for them in your thoughts and prayers.