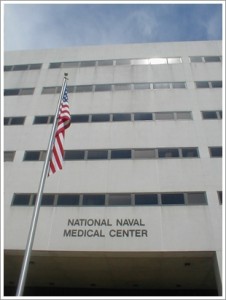 The April luncheon rolled around and for the first time ever I was unable to attend. I had promised a Biker I know – okay, my husband – way back in January that I would do the Spring Poker Run with him. The date that worked out the best for the hospital and the rest of the Crew just happened to be on that same day…

That’s okay, though. I met the Scroll Man. 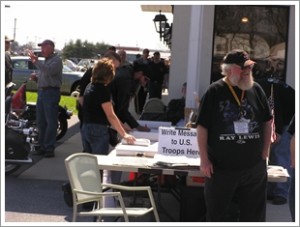 He travels around the area to different events, shopping centers, any place there will be a crowd with his scrolls – each one is 450 feet of white paper. Once one is filled with messages to the troops he mails them off and starts a new one. Sunday he had 5 scrolls –

Army, Air Force, and Marines – to go to Afghanistan, and one for Walter Reed.

“Is there any reason you don’t have one for Bethesda?”

“Well, I don’t know anyone who goes there or I would.”

I gave him my name, phone number and email address…

Thank you, Scroll Man, for what you do.

A few days before the luncheon Brittany came by and picked up all the supplies, afghans, quilts and niftie-giftie stuff to take to Deb’s. Deb and Robin did the food shopping and food prep Saturday and Jean joined them later in the day to put the gift bags together I had emailed the encouragement notes in a word doc to Gladys and she printed them out for the guys. Brenda was in charge of giving everything out and taking pictures

The morning began a little chilly but the sun was shining brightly and it was a beautiful spring day.

This was the first time Brenda had been able to go in a long time and she sent me this:

Except to say hello I didn’t get to talk with the Liaison.  She seemed very nice, and funny when she mentioned how she became a Marine – “They told me I was going to summer camp.” Then she became serious and said that she “wanted to give back.”

I kind of depended on Robin to let me know who I was to give bags & afghans to and of course focused on taking pictures.  I didn’t get names.  I wasn’t sure if it was appropriate.  I decided to walk the halls to look for flags.  There were a few.

The lady in the picture with the afghan is the mom of a Marine in ICU.  He was in a room but was taken back to ICU that morning.  She was hoping he would be back upstairs later that day.  Mom was originally in the Marines, I believe, (maybe the girls know.) then went into the Army.  She was so appreciative of the gift bag, afghan and lunch.  I did ask if we could use her picture and she said yes. 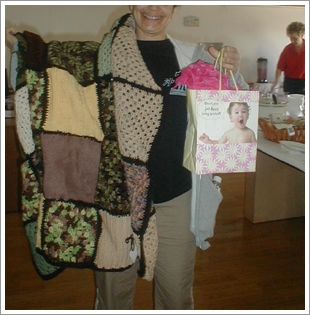 What a SMILE!!!! Okay, I cropped the picture – this could be *any* Military Mom.

The afghan is from Esther and her Ladies and the “Don’t you just love to be spoiled?” bag is from Karen with goodies inside from Anne and Friends and Judi and Co. The food was bought with the help of WA State Operation Thank You among many others, —just a few of the ways that Marine Moms –Bethesda includes others to let the families and patients know they are in the Hearts and Prayers of America.

I helped a Marine carry a plate, gift bag and afghan back to his room.  He and his fiancé have a place in Florida on the water.  He misses his dogs and now is missing his fiancé.  She was here for 2 weeks.  He’s been in and out of surgery for a few months now.

His fiancé was with him until Sunday morning.  She was ready to quit her job just to stay by his side.  We talked about the struggles military husbands and wives face and how lucky he feels to have such a strong person standing by him.

Although he still made her go home and back to work saying the economy is too unstable for you to lose your job.  (Another reason it feels so good to know we can bring a little piece of home to these men and women who can’t get out to enjoy what the rest of us can.)

A gentleman once in the Marines, now a Navy medical student told us the Marines did a lot to prepare and discipline him for what he is doing now.

As I walked the hall I saw a group of men in a room with a patient.  With a subtle “Hi, how ya doin’, did you guys get some lunch?”  I pointed to the flags, 1 Marine, 1 Navy, and asked the patient what branch of the service he was in.  He laughed and said, “Well that’s a funny thing, I’m a Marine but now I’m Navy.” 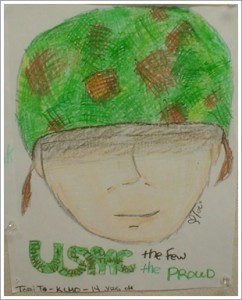 The most touching thing and what holds a special meaning to me is the core reason we do this.  To Honor, Thank & Serve those who have committed themselves to SERVE.

This lunch had a deeper meaning for me than I expected.  I always come away feeling proud.  Not of myself, but proud to have met and shaken the hands of the FEW that allow me to live as I do.  In meeting 3 Marines who are now serving in other branches of service, I am able to tell my Marine how proud he should be to be part of the FEW that are able to serve in such a way that benefit ALL.

I was speaking with my son recently and told him, “When we go to Bethesda it’s for the wounded and their families.  When I see these guys I see a person that did something for me that I couldn’t do for myself!  Serve & Protect!”

I’ve heard non-military make comments like, “They went in because they screwed up or didn’t know how to handle civilian life.”  “They’re only trained to do one thing, that’s all they know how to do.”

I’ve also heard comments such as, “When I got out I didn’t know what to do with myself.”  “Civilian Life is more complicated than being a Marine.”  “I’ve been a Soldier for so long, I don’t know how to be anything else.”

They do what most of us cannot do!!

THEY SERVE and PROTECT!

~Blessings and Hugs to You, 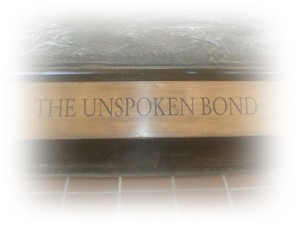 I asked Brenda what the “Unspoken Bond” picture was from. I was pretty sure I knew but wanted to double check with her first.

It’s at the base, (the core foundation) of the statue in the foyer when you walk into the hospital.  When I saw the words it captured me.  I know how often a band of brothers use this phrase, be it Marines, Soldiers, Firemen, etc…  there really is an “Unspoken Bond” and I believe it truly is how they persevere.  They can push on through any fight with and for the sake of their bond with their brothers.  That statue held a lot of meaning to me the first time I went to Bethesda. 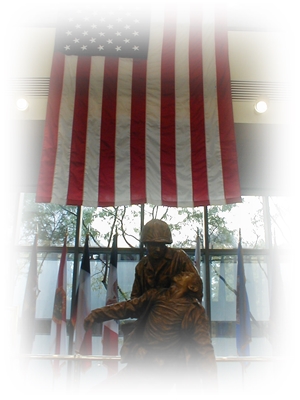 Continued Prayers for our military and their families.