The day before a luncheon I head over to the Western Shore to food shop and get ready for the luncheon with the rest of the crew and we knock it all out with enough time to sit back and enjoy catching up with each other.

I’m always leery about planning a luncheon from January through March though, because of flu season and the weather.  In fact, a few weeks before this luncheon we had a “what if” discussion.
And then it happened…

“It’s not looking too good here either, Robin.”

“You might want to call for a Bridge report.”

“Noooooo, not a bit. Deb, BWI’s reporting freezing fog. I don’t think I’m going to make it over there today. Man I hate to cancel…”

The guys at Mercy Hall went out, did their job, and traveled on roads in HMVVs not knowing if they were going to make it back to camp without hitting an IED or being shot by a sniper.

And here I am worried about a little winter storm. But tomorrow was forecast to be above freezing and sunny. Surely the roads would be clear, major highways and all that…

There must be a way to adapt and overcome… hmmm…

“Well, my neighbor went in to work and he said the roads are okay but the parking lots are icy. Did you call for a Bridge report?”

“No, but I keep watching the Bridge cam. You can’t see the toll booths because of the fog, it’s that bad. It’s supposed to lift later, but I don’t think I want to drive over there today. How would you feel if I did the shopping here and then meet you all tomorrow morning?”

“Sounds good to me.”

So that’s what we did. Thursday morning dawned bright and sunny and the roads were clear. I swung by and up picked Jack, who is a member of Marine Corps League Detachment 439, then we met Jean in Annapolis, and headed out. On the beltway, we heard a car honking as it drove by — Robin and Gladys! We all met Jess and Grace not far from the hospital and car pooled in to the hospital together.

Jess, the youngest of our crew and the sister of a Marine Veteran, wrote a little something and with her permission I am sharing it here.

When I heard that Marine Moms-Bethesda’s luncheon in January was going to be held on a Thursday and that it was going to be in Mercy Hall, I was thrilled.  I’ve done two luncheons on 5 East, but my schedule is such that weekend events are tough for me to make, and on both occasions, the ward was thankfully quiet. 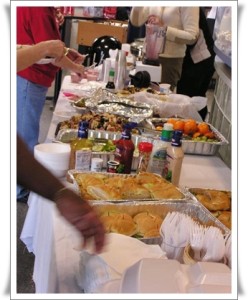 This luncheon was, in a lot of ways, completely different. We didn’t have dedicated space, and set up in the lobby/common room, right next to the main desk, and just out of the way of the pool table and couches surrounding a large screen TV, where some of the guys were watching ESPN.

Instead of seeing a lot of doctors, nurses and service staff, we saw mostly Marines and Sailors.  Some were in uniform, some were in their sweats, and let me just say that even when a Marine is in their sweats, they look more pulled together than a lot of men I see walking down the street. Some moved about freely, and others moved with the assistance of a cane or wheelchair.

Historically, what strikes me the most about these luncheons–and I don’t know if you can really appreciate just how much of a production they are unless you’ve seen it first hand–is the amount of time and energy and love that the Marine Moms put in to them.  To the Moms, every single Marine in the building may as well be their kid–that’s how much energy they put in to everything they do. 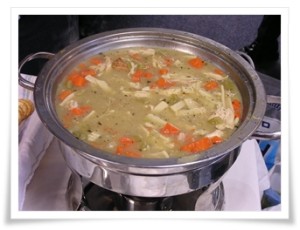 The first Marine who came in to get lunch spoke with us for a little while, and when he left with a bowl of homemade chicken noodle soup, he said he needed to go call his mom.

There wasn’t a single person who came into the room who wasn’t simply gobsmacked by the amount of care and thought that had gone into putting together the luncheon.

Most of the guys even took the time to shake our hands, look us in the eye, and say thank you.

Every time it happened, I wanted to cry.  I could not have been more touched.  THEY were thanking ME?  That wasn’t how it was supposed to work!

I still can’t get my head around it.

No one there was in it for the thanks.  We fed them because we could.

Because there is no gesture on earth that could possibly show those men what enormous gratitude we feel, and how very much they are appreciated.

We gave them letters of thanks so that they knew that we acted on behalf of so many more people than the ones mixing their smoothies.

We passed along afghans and quilts as a symbol of the warmth and love that we and others wish for them, and so that they could wrap themselves in that energy once we leave.

It is an honor to be able to do that for our men in uniform, and to have them thank us for it speaks volumes to their character.

As far as I’m concerned, every man in that room on Thursday was a rock star, and I hope that they know it.

I understand that they aren’t in it for the glory, and that when it comes right down to it, they’re really “just doing their job,” but every time I get to be a part of the luncheons, it blows me away. 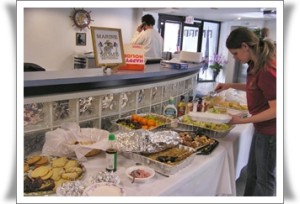 Grace and Jack joined us for the first time and we were very happy to have them. One of the Sergeants took the three of us up to 5 East where we passed out quilts to the combat patients that wanted them, along with notes of support. We left boxed lunches and smoothies in the refrigerator in the pantry.

By the time we returned back to the barracks, the room had quieted down, the guys had all left for a meeting and we discovered that one of the crew is… a pool shark! 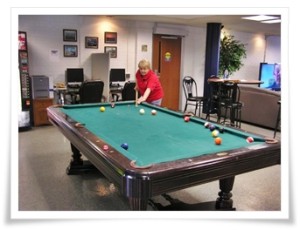 Our heartfelt thanks go to our supporters who made the luncheon possible.

Our gratitude goes to the men and women in uniform who protect and defend our Constitution.

Links below for surfing around.

https://afterdeployment.org/  Core project within the Defense Centers of Excellence for Psychological Health and Traumatic Brain Injury

WASHINGTON, Jan. 29, 2009 – Stephen Cochran was a normal 19-year-old with a dream of making music his life when the Sept. 11, 2001, terrorist attacks led him down an unplanned path to the Marine Corps.

“I dropped out of college. I walked away from a record deal,” he said. “I was engaged.”
He didn’t discuss his decision with his parents, or even his then-fiancée, who broke the engagement when he announced he’d enlisted. “It was really the first grown-up decision I’d ever made,” Cochran said. (More at the link.)