This evening, November 10, all over the country and beyond, Marines are celebrating their birthday. They weren’t born under a cabbage leaf, you know.  They were born in a tavern.  Tun Tavern.

And ever since, for 240 years, they’ve been Defending Freedom. 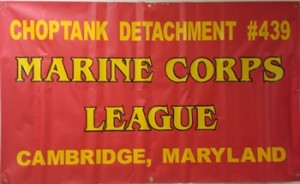 I had the pleasure of attending Choptank Marine Corps League Detachment’s Marine Corps Birthday Party at the VFW in Easton, MD tonight.  The Detachment adopted Marine Moms-Bethesda back in 2009, supporting our mission at Bethesda, then Walter Reed after the two hospitals combined.

A buffet came next, cooked and served by the VFW Ladies Auxiliary, best mac and cheese and scalloped potatoes ever, along with cole slaw, wings, and meatballs.  Then the cake cutting ceremony with the oldest and youngest Marine cutting the cake using Wayne’s sword. 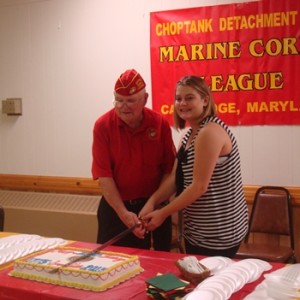 I always feel like I’m in the company of Heroes at their Birthday Party.  There are WW II Veterans to Marines recently out of Boot Camp celebrating the Corps together. And when they all say “OOH RAH” in unison it’s something to hear.

Marine Moms-Bethesda was honored to receive a very generous donation toward this year’s “Holiday Cheer” project from the Detachment.  Thank you so much, we are very grateful for your support — Marine Veterans supporting Marines in the Wounded Warrior Battalion at Walter Reed.

It was a humbling evening.