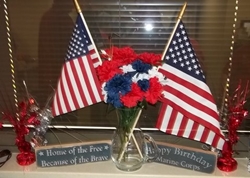 All Rolled into One!

These are the oaths our military take when they place their “John Hancock” on the dotted line.

The Oath of Enlistment for the Armed Forces (except the Army and Air National Guard):

The Oath of Enlistment for Air and Army National Guard:

“I, (NAME), do solemnly swear (or affirm) that I will support and defend the Constitution of the United States and the State of (STATE NAME) against all enemies, foreign and domestic; that I will bear true faith and allegiance to the same; and that I will obey the orders of the President of the United States and the Governor of (STATE NAME) and the orders of the officers appointed over me, according to law and regulations. So help me God.”

They have pledged on their word of honor that they will defend our Constitution, and the oath does not end when their DoD contract is up.  As a Marine said to me when I congratulated him on receiving his DD-214 and not having to worry any longer about being called back, he said, “Yeah, thanks, as long as there’s not a WW III.”

On October 21, 2011, President Obama stated that all of the troops will be home from Iraq by the end of the year.

I hope they don’t have to go back.

We owe our military a debt of gratitude that can never be repaid.  Thank you for serving.

As always, it was an honor to serve our combat wounded, their families, and the staff that cares for them on 4 East at WR/Bethesda just a few days after the 236th Birthday of the Marine Corps and Veterans Day!  We truly do appreciate the opportunity to be at the hospital at least once a month to show a very small gesture of “thanks” to these brave men and women who have volunteered during a time of war to defend all that is good that the United States of America stands for.

We enjoy meeting their families, too.  Love the different accents – Long Island, Louisiana, mid-west, all over… Their accents may be different but they are there for the same reason – to support their Loved One on the road to recovery.  So we support them the best we can in the few short hours we are there.

Our volunteers ROCK and really put out a spread for these Heroes!  All of Janet’s beforehand planning paid off.  She was so organized she even had a table layout planned for us to look at ahead of time. 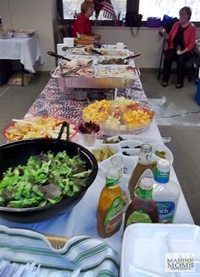 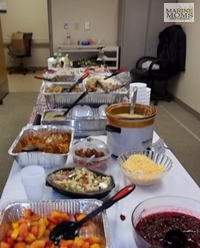 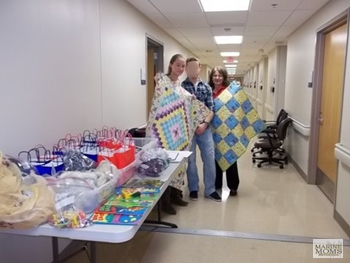 Not only do our volunteers rock, but our “Efls” do, too!

We have been able to provide some awesome meals to the troops and their families this year because of their selfless generosity.

The quilts from Bayside Quilters, the slippers from Carole, and the pantry bags Julie packed for us with flags added by Janet were all appreciated.

We have close to 30 “hands on” volunteers and many only see each other at the luncheons a few times a year so it’s nice to catch up with each other.

Working together serving the meals is always a pleasure, and meeting each other for the first time after sharing the planning emails is a treat.

Memories from the day:
Sitting through four green lights to make a left hand turn into the base and arriving at the gate to find out that YES! The Guards do their job and do it WELL!  And they are polite when they do it, too.  I don’t know that I would have their patience.  Well, I guess I would have to if I were them.  Thank you, MCLO for coming to escort us on base.

Organized chaos as our tables were set up, food was set out, and then voila!  A table full of a Thanksgiving meal.

The Marine who took the turkey leg made the whole effort worth it for us.  The smile on his face as he wheeled out of the luncheon room was priceless! Comfort food… it’s the little things…

The Notes we collect  to give to the patients and their families – yes, they do make a difference.  Our loyal note writers, month after month, let them know people care.

Thank you for serving our Country and for the many sacrifices you have endured in doing so… for America and the World’s Freedom.  We are proud of YOU!  –PCBA Physically Challenged Bowhunters of America

It’s Veterans Day in the USA and we proudly salute the veterans, both men and women, who have served our nation with honor, dignity, pride and sacrifice. We remember–and we thank you. Our flag will forever fly and we are forever free, thanks to you and to the blessings and grace of God on our nation. May God bless each veteran whose life we celebrate today. Stand tall, veterans everywhere – we salute you!
– Marilyn, Proud Mother of  CPL  T.,  US Army, 10th Mountain  Division  ”To The Top”

The notes ARE appreciated!!!!

Jaime, from “Touch of Relief” is always looked forward to and always goes that extra mile.  One of the Marines heard about him giving free massages and asked him to come down to his room to do one for him. Even though Jaime had told me he had to leave by a certain time, he stayed longer so he could do this.
Thank you, Jaime!

Our “Holiday Cheer” events are almost here.  December 1st on 4 East and December 10th at Richmond.

The Christmas card deadline has passed, boxes are arriving daily and cards are being screened. Cookie bakers are being lined up, stocking lists are being reviewed and we’re planning the menus.  Busy times.

We’re in this for the long haul… I hear that some of our volunteers are already planning meals for 2012 dates. 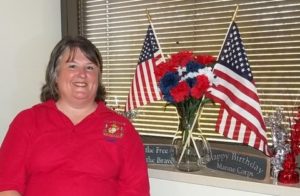 Janet, thank you for planning today’s luncheon and for sharing your pictures for the webpage.