When I told the butcher I was going to wipe him out of steaks he asked me why. “We’re having a barbecue for the guys wounded in Iraq and Afghanistan tomorrow at Bethesda.”

“Would you like me to cut them fresh for you? It won’t take long, 10 minutes or so.”

They were just gorgeous and even better, they were on sale!

We arrived at the hospital, unloaded, and while Jess, Susie and Jeanne were setting up inside I was outside showing Wayne and Russell the huge tub of steaks, hamburgers and hot dogs buried in ice, another container with all the flippers, tongs, spray bottle for water, sharp knife, pot holders, BBQ sauce, A-1 Sauce, serving trays, and 4 bags of Matchlite. 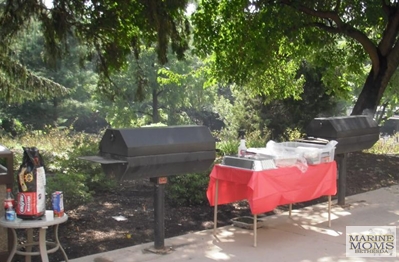 Jane: “I don’t know how to do this stuff. Someone else always does it.”

Russell: “I don’t either, thought you did!”

Robert to the rescue! 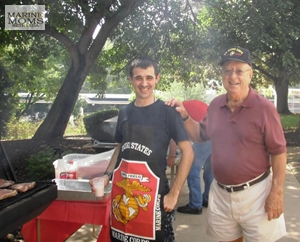 It turns out that Robert was a cook on a ship before he came to Bethesda to work at Mercy Hall.

He poured the charcoal in, burned the old grease off of the racks, put on the apron and was ready to roll, perfectly comfortable as “cook of the day”.

A man in uniform AND he cooks AND he’s a good sport!

Russell, a WWII Veteran, is married too, to Jeanne. 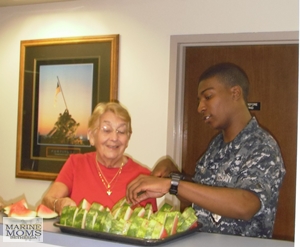 Back inside Jeanne had some help cutting up the watermelon.

Susie was hobbling around setting things up. The Marines offered to get her a wheel chair so she wouldn’t have to walk around on broken toes but she declined.

Jess and Jeanne had 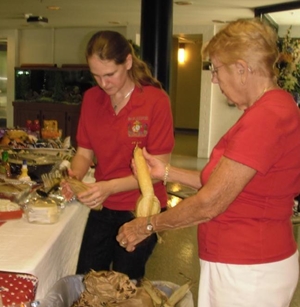 the task of husking the corn Susie had grilled that morning. 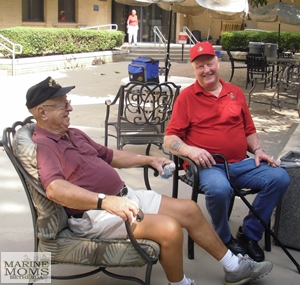 Hard job but someone had to do it!

The Choptank Marine Corps League Detachment they were representing donated the funds to buy the steaks, hamburgers, hot dogs and more for the BBQ.

It was time to draw the winning name for the “Maid of Honor” quilt.

And the winner of Marine Moms-Bethesda “Maid of Honor” quilt is
Tom and Marcia A. from Maryland!
Congratulations!

But you know what? Everyone who participated in the quilt raffle is a winner!

Thank you for caring enough about the men and women Marine Moms-Bethesda serves to participate in the raffle. These men and women have served our country, have hit a rough spot and are adapting admirably and courageously to a tough situation. They are overcoming hurdles daily that many of us would never dream of having to face.

One of the most satisfying things, for me, about doing the luncheons, is to see their recovery month to month. Some of the Marines we usually see weren’t there for the BBQ and we found out that they were home on leave but will be returning. Others we met a year ago, still recovering, some still going through surgeries. 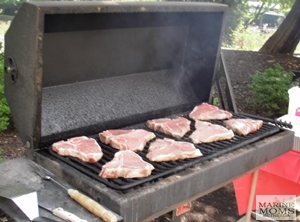 There are Marines at Mercy Hall that we met on 5 East when they were in a wheelchair being pushed around by a Corpsman. Now they are walking on their own with the help of a cane or completely on their own. Others are waiting for their final paperwork. The new arrivals that haven’t experienced one of the luncheons are so appreciative of them. They all are, and so are the family members with loved ones on 5 East who come over for lunch.  They ALL look forward to us coming back.