Hey Jane. Just wanted to fill you in on today’s luncheon. Since it was just the two of us, we pushed back the start time to 11:30. But we were more than ready to start at just after 11:00!

The highlight for me was a family I saw walking the halls…that I invited to come have some lunch. They declined at first, but came by about 30 minutes later without the older gentleman. I asked them who they were visiting and the man said, “My dad, he just got a kidney on THURSDAY!” I couldn’t believe he was the man I saw walking the halls earlier…three days after a kidney transplant!!! Amazing things happening at Walter Reed, as you know!!!!

The quilts were a big hit and families were so appreciative! It never gets old to see how genuinely thankful the families are to receive our goodies!

I got the wings and wraps at Wegmans (through their catering department). I was very satisfied with their stuff. I was able to order the food on line and then pick up the stuff on Saturday night. I would definitely use them again. They have a great variety too.

Here are some pictures from today…

We’re very grateful to our supporters who help make the luncheons happen! 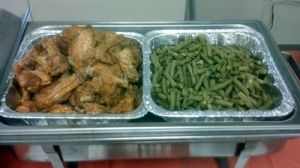 Thank you to those who serve our country, past and present!

DoD May Deploy up to 4,000 Troops to Combat Ebola

There are 205 U.S. service members in Liberia today with another 26 in neighboring Senegal. All service members are supporting the lead federal agency for American participation in the crisis — the U.S. Agency for International Development.

U.S. personnel are also on track for completing a hospital for infected medical personnel on Oct. 18. “Construction of two treatment centers for other Ebola victims will begin today and should be completed by the end of the month,” the admiral said.

A snip from it:

The soldiers will deploy in late October, Kirby told reporters during a briefing, and they will become the headquarter staff for the joint forces command, led by Army Maj. Gen. Gary J. Volesky.

Is sending our troops over there really a good idea? What will the long-term ramifications of this be to our troops, their families, and our country?

And then there’s what’s going on in Iraq…