This came to us in an email the morning of the 242nd USMC Birthday from one of our Marine Dad “Elfs”.  He’s a private person,  likes to stay in the background… and when he speaks, we listen.  He has a special gift of saying so much in so few words.  And he has a very deep respect for Marines.

“On this, the 242nd birthday of the Marine Corps, I, like all Corps parents have deep emotions about our sons and the battles they fought and some still fight.”

Reading the battles our sons fought during active duty listed along with some of the most hard- fought battles in the history of the United States Marine Corps – Guadalcanal, Chosin, Khe Sanh and so many more in the Commandant’s 2017 Birthday Message… yes… we have deep emotions.

And we’re very proud of our Marines – every single one of them, whether they’re a 96 year old Iwo Jima Warrior or a PFC at the Recruit Depot on Family Day, we are proud of them, and we are grateful for their service.

Thank you for serving.

You can read the Commandant’s Birthday Message here:

or watch his video message here:

And then there is this:

“Be a man of principle.  Fight for what you believe in. Keep your word. Live with integrity.  Be brave. Believe in something bigger than yourself.  Serve your country. Teach. Mentor.  Give something to back to society.  Lead from the front.  Conquer your fears.  Be a good friend.  Be humble and self-confident.  Appreciate your friends and family.  Be a leader and not a follower.  Be valorous on the battlefield. Take responsibility for your actions.”

These words from Marine Major Douglas Zembiec were taken from his combat journal under the title “Principles My Father Taught Me”.  Major Zembiec was killed in action March 11, 2007, during his 4th tour of duty in Iraq, during a raid against insurgent forces.

The “Lion of Fallujah”. 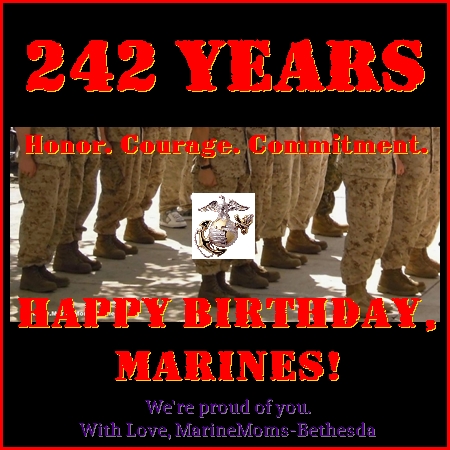