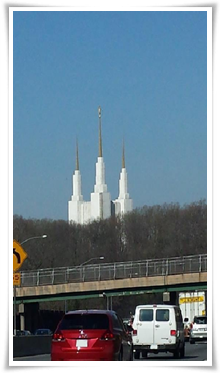 Barb and I rode over together to Mercy Hall.  It was nice having someone to talk with during the hour and half drive to Walter Reed.  She’s good company.

Thursday DC Beltway traffic is a little heavier than the Sundays we go over and this Thursday was no different. It was comforting to see the steeples, we knew we were almost there.

We arrived and unloaded, the Sailors set up the tables for us, then I went to park while Barb began pulling everything out and arranging the food.

Did you know parking at Walter Reed during the week is the pits?  Yeah, it is. She was almost finished by the time I got back.

The luncheons make the drive and the parking worth it though.  The guys and gals enjoy them and are so appreciative of the meal.  Lots of new faces this month.  December was the last time we were there and we saw a few guys who had been to that luncheon.

We had to cancel February’s Mercy Hall luncheon, the first time this has happened in our many years of going there. This was a winter we’ll be talking about for a long time… until the next one anyway.  We aren’t used to a lot of snow in this neck of the woods. 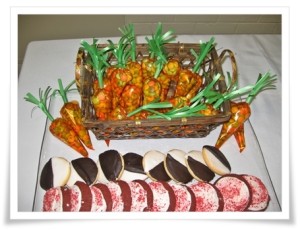 Oh, the Easter Bunny dropped off some carrots.  And yes, those are Red Velvet Cookies.

One of the Dads said it did his heart good to see us Marine Moms. He’s a Marine Veteran who was there with his Navy daughter.  (We told him one of us is a Marine Mom and the other is a Navy Mom.)

We saw a few patients with musical instruments, had not seen that before.  The NICoE next door has music therapy.

We may have one more luncheon at Mercy Hall before the move over to Sanctuary Hall.  When that happens we expect to be serving double, maybe triple, the number we’re serving now.  But hey, we’ve got the logistics down pat!  And we love a challenge!  And we love who we serve!

Thanks so much for your help, Barb, and for sharing your pictures!  It was an excellent luncheon!

Thank you to our supporters.  I wish you could see the look on their faces when they come into the lobby and see the buffet. Most of them don’t know we’ll be there.

One day, most likely, the men and women we serve at Mercy Hall will be transitioned into the Dept. of Veteran Affairs health care system.

“Deaths at Phoenix VA hospital may be tied to delayed care”

How someone can do this and keep a clear conscious – keep secret lists, when they are supposed to be serving Veterans who have willingly served our country, with all of the money that’s been poured into the VA in recent years, hiring thousands of extra help, supposedly making progress in the long wait times for appointments – is beyond my comprehension.

How do they sleep at night?