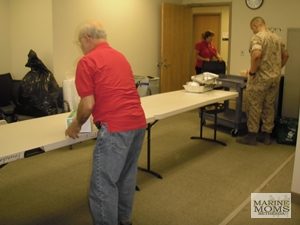 This wing of the hospital is brand new and has that “fresh, clean, new paint, shiny floors” look and feel to it.  Nice room we set up in and we’re happy to have the space to spread out without being in the hallway, too.  Wheelchairs and walkers can come in and go around the table with plenty of room.  Drinks and the nifty gifties can stay inside instead of being set outside the doorway.

Things began kind of slow at first with a few here and there coming in.  Staff would come along and we asked them to come back in a little while, let’s give the families first opportunity to eat.

Katie went down to ICU to invite families there to come up.  They don’t even have a fridge to store food in on the floor they are on, or at least the families who came in were under that impression.  Maybe there is one, would hope so.  We loaded them up with a lot of food to take back and share.

We had packed up and Shirley and I were in the conference room waiting for the cart to come back upstairs when someone stuck his head inside the door and asked if this was where the party was.  He was wearing an Army dress uniform and a Medal of Honor.

Sergeant First Class Petry was there with a friend, going room to room speaking with every single patient on 4 East.  He took the time out of a very busy afternoon to spend a few minutes chatting with us.  It was such an honor to have met him.  I had watched on TV when he was presented with his Medal of Honor.  Never dreamed I would ever meet him in person.

“Every human impulse would tell someone to turn away. Every soldier is trained to seek cover. That’s what Sergeant Leroy Petry could have done. Instead, this wounded Ranger, this 28-year-old man with his whole life ahead of him, this husband and father of four, did something extraordinary. He lunged forward, toward the live grenade. He picked it up…and threw it back – just as it exploded.”
–President Barack Obama (read more…)

Heroes are all around us.  We’ve met many, many of them at Bethesda.

Angels are all around us, too.  Thank you, Gladys, Bob, Shirley, and Katie for your help with the luncheon, and to Sgt. 1st Class Petry for your selfless service.  You each made the day special.