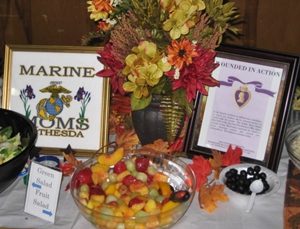 Beltway driving coming in from northern Virginia is not my favorite thing to do… may have to just gather my courage and do that next time, though.  If i can drive “The 5″ in California…

Janet, Mike, Lew, Carol, Mary Jane and I met in the parking lot at Hunter-Holmes McGuire and our contact took us over to the entrance to the multipurpose room where the luncheon would take place.

Wow… we were impressed!  Tables were set up with linen tablecloths for the luncheon.  That was really nice. 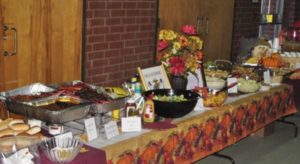 Janet had a fall theme planned and the buffet tables looked really pretty with her tableclothes, decorations, and all of the food. 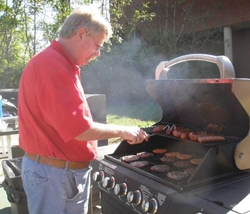 BBQ – A beautiful autumn day with Lew and Mike manning the grills.

Hamburgers, hot dogs, brats and veggie burgers.  Okay so the veggie burgers won’t be coming back with us again! MEAT!!! They want MEAT!

Some people make really good baked beans and Carol is one of those people. 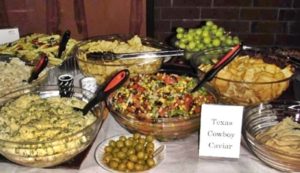 Cole slaw, potato salad, pasta salad, fruit salad, Texas caviar, chips and dips, hummus – okay so the hummus won’t be coming back again either.  We are finding that each location – 4 East, Mercy Hall and Richmond – have their favorite types of menus. 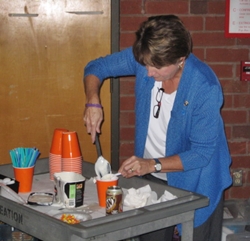 The zucchini bead was great as were all of the other desserts. Many thanks to everyone who helped with the food!

Two of the Marines from the Liaison office were there, one with his family.  We had met them when we were there before. It was nice putting a face with the wonderful VA person I had spoken to on the phone several times.  Paulette has been there 22 years and told me about how the VA has adapted and changed since the war began. The Fisher House manager came over and we met him, too.

We served some Marines, families of Marines – one we had met at Bethesda, some VietNam Veterans and families and a few others who were there visiting family members in the hospital.  It is so very different at Richmond compared to Walter Reed NMMC…

I would have loved to have spent some time with the Sailor.  He had some stories to tell.  I don’t think he had any family.  One of the Marines we met who was with his wife… his spirits were SO UP and although I know he has a very long road of recovery ahead of him, I have full faith that he will adapt and overcome any obstacles to the very best of his abilities.

I cannot speak for our other volunteers, but speaking for myself I will say serving our war wounded has changed my life.  I am so grateful for our supporters and for our volunteers, and most of all I am grateful beyond words for the men and women, and their families, who serve our country.  I cannot imagine what it was like during Viet Nam when communications were slow, when the medical care had not advanced to the point it has today…  when this country’s media was overtaken by the anti-war groups…
NEVER AGAIN! NEVER FORGOTTEN!

Did you know Marine Moms-Bethesda collects emailed notes of support?  Yep, we do.  We format them into a word document, print them out, and hand deliver them during our visits to the hospital wards.  If you would like to send a short thank you, thinking of you, upbeat, encouraging note to the guys and gals who paid a HUGE sacrifice defending our freedoms, you can email them to Notes4Bethesda @ MarineMoms-Bethesda.org (remove the spaces in the addy.)