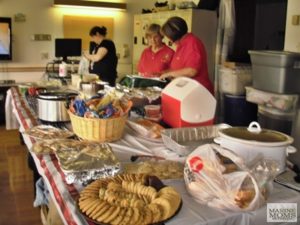 The luncheon went well and the families and patients were very appreciative of the food and the nifty gifties, with one highlight being the 54 movie DVDs from Mary’s friend, a fire fighter in New York City.

It was touching to watch the family members pick through the movies carefully, looking for the perfect movie for their sons or husbands, or in one case, for their big brother.  They do not think about themselves – they think about their Loved Ones.  One of the dads told me after his son had watched the movie, he was going to give it to the Red Cross to add to their movie cart, so the gift just keeps going.

We had some names to look for.  I showed the list to a Marine’s dad hoping for help in finding some of the Marines on the list and he was totally amazed to see his son’s name on there.  It really does give the families and the patients a good feeling knowing someone back home or with their son’s unit is thinking about them!

One of the patients had served with my son (same battalion, different company) back in 2004-05, and I found his room empty.   I left two quilts for his little boys from Aunt Jeanne and Bayside Quilters, a packet of encouragement notes and a pantry bag on his bed.

As I was leaving to go downstairs to load the car up to go home, he came off of the elevator so I was able to meet him, hug him, thank him, and would have loved to spend more time with him but that will happen another day.  He will be there awhile. 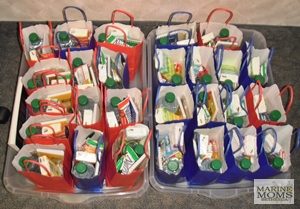 Having Julie, our resident “Bag Lady”, do the shopping and filling the pantry bags was wonderful!  She shops for and fills them, then passes them on to Katie to bring with her.  I still find myself picking something up in Wal-Mart and then smacking my fingers, putting it back on the shelf saying, “No, no, no! Julie has this all under control!”

Gladys and Bob were able to join us for this luncheon and brought the flowers with them.  Bob stays busy making smoothies and Gladys floats around helping where she is needed.  Once again there was a Marine mom who was not fluent in English and Gladys was able to speak to her and comfort her in Spanish.

Barb and Don ran errands for us, helped with the food, took some things up to the 7th floor and over to Mercy Hall for us, and helped take food back to rooms for those who needed an extra hand.

Diane, Shirley, Lew, Mary and Stephanie kept the plates and silverware stocked and the abundance of food hot and flowing.

Katie did “Door Duty”.  We have come up with a way to be more exact with the number of people we serve.  An easy person to talk to, Katie fills this job perfectly.

Jaime and Kelly from “Touch of Relief” provided free seated massages to family members. It took about a half hour for word to get around that they were in the waiting room all set up.  After that, it didn’t take long for the line to form. They stayed busy! 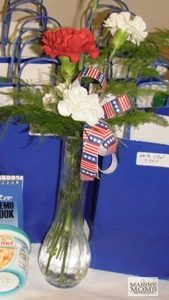 “The world laughs in flowers”  and fresh arrangements made the luncheon special!  The red, white and blue bud vase arrangements from Robin and Sylvia’s garden club, “Crofton Greenery”, were beautiful and brought a lot of smiles.

This is the second year Crofton Greenery Garden Club has sent flowers for the patients.  We took them out of the boxes and placed them on the cart with the pantry bags and support notes to give out as the patients and families came out of the luncheon room.

As always, something for everyone in our assorted drinks – fruit juices, Gatorade, Coke, Diet Coke, Yoo Hoo and Ginger Ale.
Marine Moms-Bethesda is very grateful for the outpouring of support from our volunteers and supporters.

When I think about the support given to the wounded, injured and ill combat troops and their families during one of our luncheons, it is truly touching.  These troops whose lives have changed forever are supported by people all across the country.

We may be small, but the impact is tremendous while we are there, thanks to you.  Thank you for your continued support of the luncheons we host for the Marines, Sailors, Soldiers, and Airmen and their families at Bethesda!