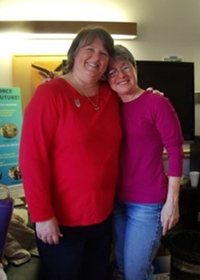 “My Son by another Mother.”

Some of us Marine Moms and Dads have known each other since boot camp, others since our sons’ first deployment.  Maybe our kids grew up together in the same neighborhood and joined the Marine Corps together. Still others we have met along the way through one support group or another, whether it is from the MarineParents.com site, a Yahoo group, or from homecomings, local events, a Blue Star Mothers chapter, or, yes,  even chasing down a car in town with a USMC sticker on it!  We are everywhere. It’s just the hooking up with each other that may difficult sometimes.

One thing we have in common is we claim every Marine we meet as our own, and we do our best to “fill in” for the parents who can’t be there for their son or daughter.

Sunday’s luncheon had a very special feeling surrounding it.  Nice because it was our Thanksgiving luncheon.  The good energy and LOVE drifted out of 5 Center and through the halls of 5 East along with the aroma of barbecue chicken warming in the crockpots.

“Is that barbecue chicken I smell? That’s my son’s favorite!”

Janet and Lew coordinated this month’s luncheon and did an outstanding job! 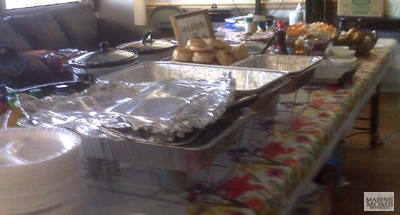 Every inch of the table was covered with food. It was amazing! 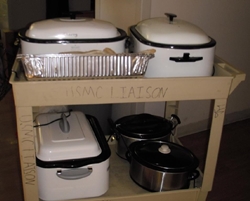 While we were setting up, I kept hearing Lew thinking out loud, “One step at a time, one step at a time.” It is organized chaos when we first arrive and he was trying to figure out the best way to set up the crockpots and electrical cords. We had three new volunteers with us and I was concerned that things would be really confuzzled, but everything went very smoothly, other than a few things we had no control over, and they were easily taken care of. 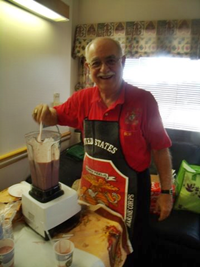 Bob made the smoothies. 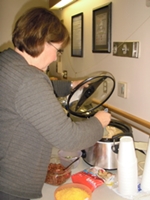 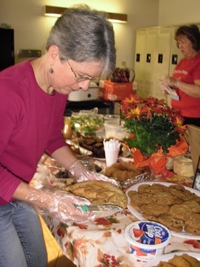 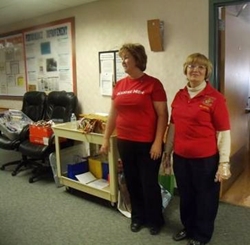 Katie and Gladys greeted our guests outside of the luncheon room and helped pass out the niftie gifties. 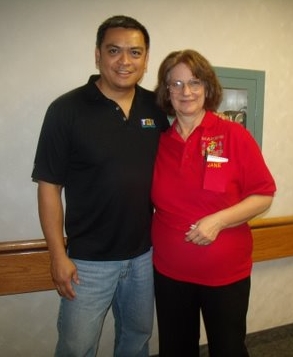 Jaime from Touch of Relief arrived and immediately set up his massage chair to give free seated massages to the patients, families, and staff.

At one point a doctor stopped in to make sure his patient, a double amputee, was in safe hands in the massage chair. He was!

A Chaplain Janet and Lew knew from when their son was at Bethesda brought by a church group that will be doing a luncheon in December to show them how we set up the room. It was a very special reunion for Janet and the Chaplain.

A Marine Dad who lives near the hospital was visiting a patient from his son’s battalion, which turned out to be the battalion that one of 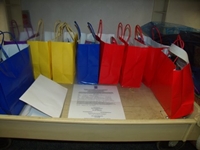 our volunteer’s son is with. It always amazes me when something like this happens at a luncheon.

We found all of the names we had been asked to look for and made sure everyone received a pantry bag and encouragement notes, along with the Silver Star Banner applications. Unfortunately we weren’t able to personally make it down to ICU, but niftie gifties and notes were passed on to some patients there by way of the ICU staff for us.

Oh! Do you send iPods to any of the military or VA hospitals or rehab centers? Who uploads the music onto them?  A mom told us about how much her son missed his laptop, iPod, and his other belongings left behind in Afghanistan.  They will eventually catch up with him. In the meantime, someone gave him an iPod at the hospital, but there was no music loaded onto it.

This mom did not know how to do it and he was unable to do it because of his injuries.  She was pretty sure it could be done there at the hospital, and I am sure it will happen.  She suggests that when people donate iPods to Bethesda, to load them with music, label it with the songs, and then it would be ready for the recipient.
Just a thought… 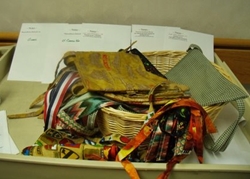 The wheelchair bags from Bayside Quilters were available to anyone who wanted them. The most popular were the ones made from Marine fabric.

We also had little gift bags for the moms, wives, girlfriends and sisters. The bags were made by Bayside out of

Christmas fabric and inside of the bags were a pair of mittens or gloves, some hand lotion, and samples of Mary Kay cleanser and lotion. Quilts from Bayside were also given out.

This is a new one for us… The leftovers from the pantry bags were left with a Marine Dad who will pass the snacks out to the families and patients for us.  We buy by the case whenever possible and not everything always fits inside of the gift bags. Since these were bought for this luncheon we left the leftovers there rather than bringing them home.

One of the patients will be heading down to Haley VA soon. Connections have been made with Momma Dee to look for the Marine and his Dad after they arrive there.

Joyce in California has the head’s up to look for some former Bethesda patients.

The Love WILL continue after they leave Bethesda.

Janet told me after the luncheon,

“I didn’t talk to many patients/ families like I have in the past few luncheons, but one mom was so excited to see the olives … it sounds silly but her son’s favorite is olives and he hadn’t had any in over 5 months.  She put a nice amount on his plate, but at the end I gave her the leftovers in the containers.  Who would have thought that olives would have made her Marine so happy.”

“Touches of Home”.
That is what Marine Moms-Bethesda tries to bring into Bethesda when we are there for a luncheon.

Thank you to the hospital staff, for your patience and understanding, for helping us find the patients we had names for, and for delivering the things we had for them.

We do our best to serve the patients and families first as that is our mission. But often the families come in late. So… I was taking them from the back of the line to the head of the line, in front of the staff.

Reason: Families live on fast food, patients live on hospital food.
Thank you, Staff, for your patience and understanding about that, too.

One of the staff came back a little later with a printed out “Thank You” for us.
That was so sweet and will be cherished!

We had finished packing up and were getting ready to leave and in fact Lew had already left, when I remembered to take a picture of everyone. One of the Marine Moms there with her son was in the room with us and offered to take it for us. Thank you sooo much! 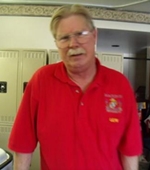 Thank you to the “Elfs” as well. We could not do this without your support!

Whenever one of us Marine parents hears of another Marine parents’ loss, a piece of our heart goes out to them. This is especially true when we or our son knows the family or the Marine personally.

November’s luncheon was sponsored in part by an Army/Marine Mom who lost her Marine in Afghanistan not long ago.

Valerie’s son was in the same Battalion as Janet and Lew, Shirley and Diane’s sons.  To have this sort of connection between these Marine parents at this luncheon was something very, very special.

Thank you Janet, for placing this poster on the wall leading into the luncheon room Sunday.

Thank you, Valerie, for choosing to honor Kevin in this way. I truly hope we honored his memory in a way that was worthy of his service and his ultimate sacrifice.

We must never forget the sacrifices made by our brave young men in defense of our country. NEVER!

Our  Supporters were recognized for their contribution to the day’s luncheon as we always do, with a list posted at the entrance to the luncheon room: 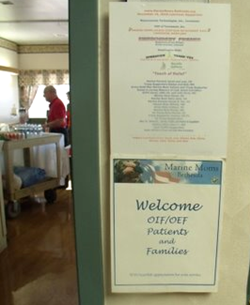 Some comments from our new volunteers after the luncheon:

“It was a wonderful day and an enormous amount of fabulous food was consumed with gratitude.  It was a unique experience.”

“My head and heart is still trying to process all the work, food and kindness that was displayed yesterday.

What you have started and cultivated over the years is such a special gift for those young Marines and their loved ones.  My husband was just amazed when I was explaining to him the setup of the food, smoothies, gifts from the quilters, the notes of encouragement.  Wow!”

Personally – this is what “wowed” me. 😉
Homemade Cinnamon Rolls someone sent along with Janet and Lew.

As did the fortitude of the wounded, determined to heal as fast as they can,
and the strength of the families caring for their loved ones.

Janet, thank you for sharing your pictures for the webpage.