It must have been the hottest day of the year when Robin, Jean, Sally and I met to shop for Sunday’s luncheon. With Deb’s beforehand help scoping out Sam’s and figuring out quantities, we were able to be in and out in less than two hours.

Good thing we had the three cars. What didn’t fit in Sally’s SUV went into Robin and Jean’s vehicles.

$842.00 worth of stuff for the luncheon, pantry bags, and a much needed stock-up of serving supplies.  It used to be $350.00 tops for a luncheon. Yes… the hospital is very busy now.

The ERA box was empty and filled with smaller things. What you see doesn’t include what was in my car or at Deb’s or the flowers that would fill Robin’s car the next morning.

Back to Sally’s for the food prep, dinner, and filling the pantry bags.

Bayside Quilters had given us some cloth bags they made for the “ladies bags” we usually take. Because of the number we would be serving, I decided to skip the lady bags and use the cloth bags for the pantry gift bags. They worked out beautifully, were very cheery, and can be used over again by the families for something else.

Priorities are – luncheon food and supplies, then pantry gift bags (snacks, microwavable food, assorted other things the families and patients can use), and then “lady bags” (for the wives, moms, sisters, and girlfriends of the patients – just a few little things, think “pamper”).

Wanting to be as organized as possible when we arrived at the hospital, battle plans were drawn up for what would go in each car the following morning, lists triple checked, meeting places and departure times decided, we ready to roll!

We arrived at the hospital Sunday morning at 10 AM, our regular time, and found that we couldn’t unload out front like we normally do because of construction, so we had to do it from the parking garage.

First had to do a cart safari.

Couldn’t do the cart safari until after the Marine safari.

Found the Marine, found the cart, and by that time Jean, Robin, Sally, and Jaime had all the cars unloaded and the trip thru the hallways to the elevator and up to the fifth floor began.
We usually begin serving around 11 AM. We weren’t ready until 12 PM.
It was worth the wait! 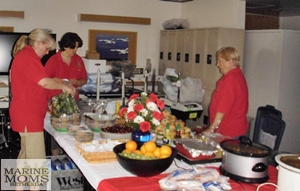 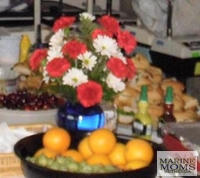 Thank you to Crofton Greenery Garden Club!
They sent along a beautiful centerpiece for the table and bud vases for the patients’ rooms.  The flowers were absolutely gorgeous and brought LOTS of smiles! We handed out the bud vases, pantry bags, quilts, pillowcases, and encouragement notes as the families or patients left the luncheon room. 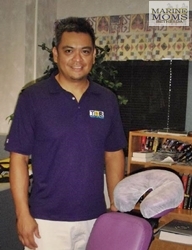 Jaime from “Touch of Relief” joined us for the first time.

Once word spread around the ward that he was there doing free seated massages the line began to form.

Jaime stayed 45 minutes longer than planned so everyone had their turn in his chair. He will be back with us on 5 East as his schedule permits.

We met so many people at the luncheon. Some had arrived recently, others were leaving that day or the next day with their sons to head home for convalescence leave. Others have months ahead of them at the hospital.

After setting up everything, I don’t remember Robin taking a break from making smoothies; she had the Vitamix going the whole time. Sally was standing most of the time outside the luncheon room handing out the niftie gifties while Jean kept the food platters filled.

When things slowed down she and Sally fixed up take out boxes and took them down to the Marines in the Liaison office. Word was sent up to 7 East and those guys came down.

I spent some time in the day room speaking with a Marine whose Mom was coming in the next day. He showed me the scars in his tattoo on his leg, and the exit wound on the opposite side that was healing while he waited for the skin graft. His spirits were good.

Later I met a Marine from my son’s former battalion; think I scared him when I let out a yelp, “You’re one of MINE!” Gave him a hug, gave his wife a hug, met his little girl and gave her a quilt from Bayside.

As always, I am humbled by their fortitude and grateful for their service. 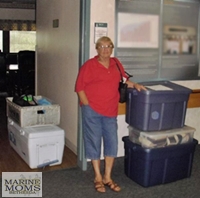 Very few leftovers and what we had left was stored in the pantry for the patients and the families.

Jean stood guard during the trips back and forth to the parking garage.

No, I don’t usually travel the beltway with a camera in my hand. Just as we were leaving the hospital a storm broke loose all over the DC area.  Poured buckets, lightening, wind, trees down on parts of the beltway, traffic crawling and lots of areas lost power.

Thankfully we all made it home safely.