We extend our deepest condolences to the Soldiers and their families at Fort Hood.

Operation Homefront has established an “Emergency Tragedy Fund” for the families of the injured and deceased Soldiers if you would like to help.

Sally, a friend of Deb and Robin’s and a new Luncheon Crew member, had been on the waiting list since May to attend the November luncheon with us. As the date got closer, she offered to host the food prep at her house and Deb assured me that Sally’s kitchen would be the perfect place to work in. 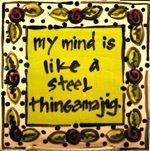 It was! And when I saw the “thingamagig” plaque on her kitchen counter… Well… =)

We shopped, Robin met us at Sally’s, we knocked out the food prep in a few hours, went out to eat, and then Sally and I stuffed the gift bags when we got back. 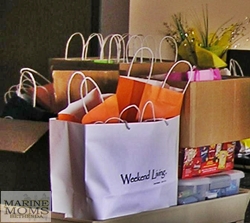 We woke up Sunday morning to an absolutely beautiful autumn day and the mouth-watering smell (well, maybe not – it was 6 AM – kinda weird smelling barbecue at 6 AM) of pulled pork barbecue in the crock pots and then… a little later, Jim rescued the mac and cheese before the smoke alarm went off.  Okaaaay, so next time we know that the two casseroles full are really three casseroles full.

A week and a half before the luncheon a friend emailed me to say her neighbor’s husband had been injured and might be at Bethesda when we were there, could we keep an eye out for them?
About midweek before the luncheon someone else sent me a list of names to be on the lookout for.

As we pulled up in front of the hospital, a man was getting ready to walk into the hospital. He asked us if we needed any help. He was most definitely a civilian so I asked if he was the dad of a combat patient there and he said yes. Turned out he was with the group of guys on the list of names. He helped us take things up to 5 East. We met some other family members of guys from that group, too.

April’s friend came in to say hello to us quickly. She was on the way to… a WEDDING! Yes!!! In the hospital chapel! Awesome! We wish the Bride and Groom ALL the best! 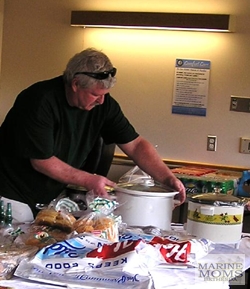 After all of the times we have taken over Deb and Scott’s kitchen for the weekend Scott joined us for the first time this month and saw firsthand what the luncheons are all about.

AND… he knew what channel the football game was on – fixed the one up in the luncheon room to it and also the one in the day room.

There was lots of food. 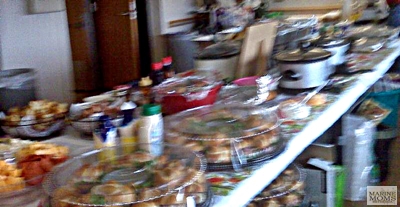 When I asked a Marine’s wife, who has been at the hospital for quite awhile with her husband, if there was anything they needed or that we could do for them, she said that just having the food there was enough, it was so nice to have “real” food, that a change from the that cafeteria food and fast food is very much appreciated.

One of the staff members came in towards the end and asked Sally for the macaroni and cheese recipe, said it was almost like what her mom used to make.

One of the Dads said being there has opened his eyes to the support of different organizations that help the wounded, and that once things settle down he plans to become involved with some of them.

The smallest show of appreciation and support is very much appreciated by these families and their Loved Ones. 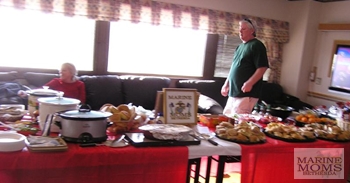 Someone came into the room and said he could smell the food as soon as he stepped off the elevator. 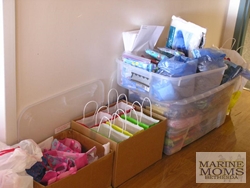 Thank you Sally, Scott, Deb, and Robin for a really great luncheon!

Thank you, Janet and the note writers, for the encouragement notes!

Thank you to everyone who helps make the luncheons happen!  We couldn’t do it without each and every one of you!
=====

We are now gearing up for “Holiday Cheer at Bethesda”!
=====
Until next time, continued prayers for our military and their families, and especially for the families who will have an empty chair at their Thanksgiving table this year and those who are so far away from home serving our country.

More below my signature. 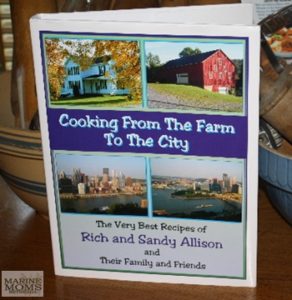 Happy News for us just in time for Christmas shopping!
Marine Moms Bethesda has a new “Elf”. Rich and Sandy have a wonderfully delightful cookbook Cooking from the Farm to the City

Jim told me it was the best cookbook I would ever see and he was right!  I am sure you will be pleased with this fine cookbook!

Thank you SO much, Rich and Sandy!
====
Would you like to support the troops?

Or head on over to Soldier’s Angels and adopt a service member. Right now as I write, they have 1608 Heroes awaiting adoption.

You could also ask around among your co-workers and friends and family – they may know someone deployed who would love some letters or care packages from home.

Mail is the biggest morale booster there is.
Or email us a note of support for the combat wounded to take with us when we go back to Mercy Hall on December 3rd.

We will need the emailed notes by Saturday night, November 28, 2009.
notes4bethesda (at) marinemoms-bethesda (dot) org
Thanks! 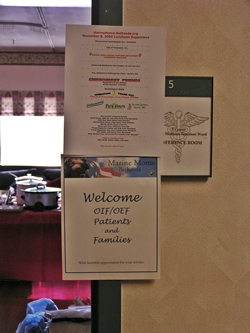