Have you ever walked into Mom’s kitchen… 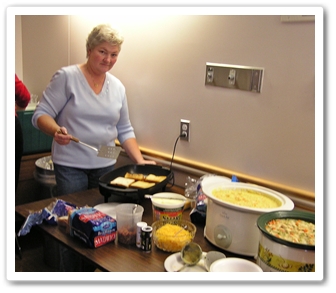 and had all of your taste buds suddenly attacked by delectable, lip-smacking smells? Mmm hmmm…

That’s exactly how it was Saturday when you walked into the room after the Moms got the soup crockpots set up  and the grilled cheese skillet going. 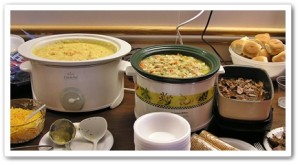 Add the brisket to the mix, and oh my! 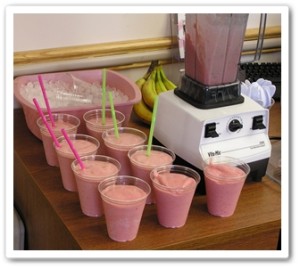 Smoothies – these are now a staple for our luncheons, and we have been told many times by family members that Deb’s smoothies really “hit the spot” with their guys. 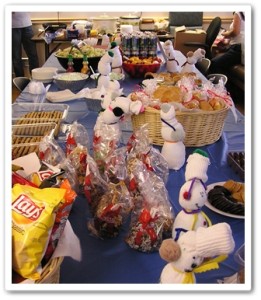 There was also the buffet table with the Snowmen keeping watch…

Seated massages by Jess of “Peace at Hand”. 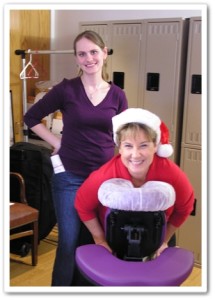 Honey and sorghum from Tennessee. 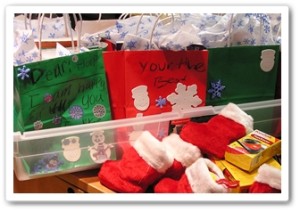 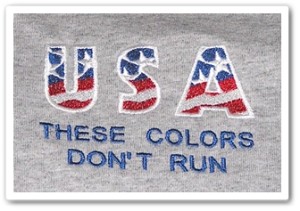 Gift bags and Arbonne goodies for the families.

“Patriotic t-shirts sent from Colorado by Embroidery Friends for the patients.”

And of course we left the pantry stocked with drinks and grab-and-go food.

However, the absolute best part of the day was… are you ready?

We moms outnumbered the patients.

In October 2005 when Janelle and I began visiting Bethesda, this was not the case. I will never forget on our first visit there, looking down the hallway after being told all the rooms were filled… feeling all kinds of emotions. My first thought was – that’s an awfully long hallway, and my second thought was, we needed to do whatever we could to help these families who were so far from home if it was at all possible. Over the past two years, we’ve evolved from visiting moms we know one-on-one to full spreads like what you see in the pictures, with support from all over our great United States of America.

One of the things that really impresses me is the care our wounded warriors and their families receive at Bethesda. When there are a lot of patients, we rarely see any staff until we are very close to packing up to go home. They want to make sure the families and patients are taken care of first. Saturday was not the case though, with so few patients. We had plenty of food to share and we served a lot of staff – A special treat for them on a holiday weekend, very far from home.

A special thank you to the Sergeant who was our escort for the day, and a most special thank you from the bottom of my heart to all of the people who made the luncheon possible. Words can never describe the appreciation of those on the receiving end of what you do to show your support to our Marines, Soldiers, Sailors, and Airmen at Bethesda. 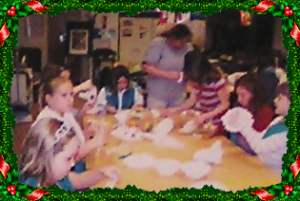 Girl Scout Troop 122 made the snowmen and snowflakes used to decorate the room and the buffet table.

They also decorated and donated the gift bags, and gave us eight boxes of Girl Scout cookies for dessert.

Thank you girls! You did a great job!

To Embroidery Friends – the Sergeant told me the guys really like the kind of shirts you sent – Patriotic.

I left them in his care to give to the patients since we weren’t able to go back and visit them.

To Roxanne and the Gang at Paul’s Produce in Dayton, TN – the sorghum that wasn’t eaten at the luncheon is in the pantry.

To Ann and her Arbonne Friends, if this keeps up, and I hope it does, the niftie-gifties you all sent will last a very, very long time!

Ronnie and Friends sent some coffee mugs as nifty gifties… they’re very nice… and yeah… I like flowers.

And to my friends that I do this with – you all are the Absolute Best!!!! 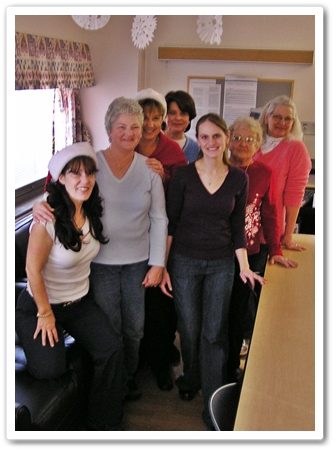 Carrie was at the luncheon with us and had the Operation Santa stockings, gift cards, and Christmas cards to hand out.

I’ll save the details of that project for her to talk about.

All I will say is this – Operation Santa at the Hospitals exceeded our expectations. Thank you all so much for your generosity and for caring! 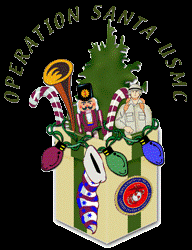 Thank you to everyone who assisted in making Operation Santa at the Hospitals an overwhelming success.

Beth was our Op Santa rep and if she hadn’t earned her wings before, she definitely has now.  Last minute, she was shipped 85 stockings and a check to go shop, stuff and deliver stockings to Balboa since we were couldn’t confirm that Mooremart had shipped to them.  And several days after I mailed the stuff to Beth, the Mooremart care packages arrived and Balboa declined to accept our stockings due to a shortage of space, although they did accept the Quixstar gift cards, and the Christmas cards had been shipped there earlier. So..I went to every facility in the area to see if they would like our stockings.  Nope…

THEN we found that there was a group in San Clemente who threw a Christmas Eve dinner for single Marines who couldn’t make it home for the holidays. We immediately sent Beth additional funds to cover last minute additions to stockings only to find out that the group had failed to raise enough money to pay for the dinner.  Thankfully, Patti Patton-Bader assisted with funding and the dinner was held.

Working with a cooperative Liaison is a blessing. Grant Olbrich is one of those guys.

We shipped the Christmas cards to Grant separately, and 50 stockings, Quixtar gift cards, and a check to Lisa to stuff stockings and then deliver.  The facility was inundated with goodies and so Grant asked her to purchase gift cards instead, so they got Target gift cards.

25 stuffed stockings complete with Quixstar gift cards, and a remote control car or robo panda were delivered to the facility on Dec. 29th while the Marine Moms-Bethesda were holding a very nice luncheon. I ended up with lots of leftover stockings since there were only a handful of patients on the ward.

The luncheon was held across from one of the dayrooms and I noticed a couple of young people hanging around in there.  I ran across with stockings for all three of them, and wished them happy holidays (it was after Christmas).  I noticed a little later that the young girl was by herself over in the dayroom so I went back over to see if she was hungry.  She couldn’t have been more than 19.  She told me that she couldn’t believe the Christmas cheer at the hospital.  Her fiancé is a sailor assigned to Bethesda as a ceremonial guard and he had caught strep throat right before she came up to be with him for the holidays.  When she got there, it was obvious that there was more wrong with him and she insisted that he go back to the hospital.  He had contracted some kind of secondary infection and ended up as a patient there.

With all of this, she still said that her fiancé had had the best Christmas this year since joining the military.  His family did not approve of his choice and gives him zero support.  All of the cards and stockings and care packages that were sent for Bethesda made his life a little better even though he was truly very sick.

This is why we do these things.

50 stuffed stockings donated by the St. Albans Boys School in Bethesda as well as dvds, gift baskets, Mooremart packages, Christmas cards, and of course the Quixtar gift cards were delivered to the donations table at the Mologne House on Dec. 29th. The table was pretty bare when we got there – two boxes of GS cookies and a box of oatmeal packets. That’s it. So Operation Santa really filled up the table.  Way to go, everybody!!!

It would be near impossible to mention everyone who helped – so many people and different organizations from all over the country made it a point to help bring Christmas cheer to those in the hospitals over the holidays.

Special thank you’s must go to:

Jack Spencer and the Spencer Team

Paul Moore and the Mooremart folks

The St. Albans School in Bethesda

The residents of  O’Shaugnessy dormitory at Virginia Tech